On Monday, the House of Commons voted on a controversial new bill published by the Government. The UK is currently in a transition period that keeps it bound to the EU‘s rules until December 31. The two sides are trying to negotiate a new trade deal that would come into effect once this period ends, but talks have been characterised by perpetual deadlock.

With the new Internal Market Bill, the Government is essentially seeking to prevent disruption to trade between the four nations of the UK if no deal is reached with the EU.

Downing Street has described it as a “vital legal safety net”.

However, the move has enraged the EU and prompted a fresh rebellion within the Conservative Party.

European Commission President Ursula von der Leyen has set Prime Minister Boris Johnson a three-week deadline to ditch his plans or face financial and trade sanctions, with the clear suggestion that negotiations over a future relationship will fail unless the most contentious parts of the proposed legislation are removed. 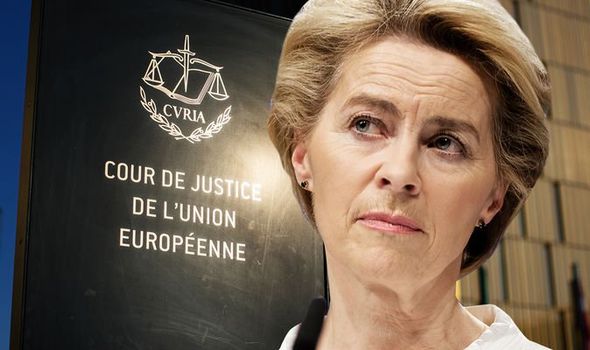 While it is true that if Mr Johnson went ahead with his plan, Britain would essentially break international law – unearthed reports prove the EU has done exactly that in the past, while arguing its innocence.

Professor of International History at the London School of Economics (LSE) Alan Sked recently made an example of this.

He wrote on Twitter: “The European Court of Justice ruled in the Kadi-Barakaat case that the EU should ignore the UN Charter (the highest source of international law) if it conflicted with the EU’s internal constitutional order.”

Mr Kadi, a Saudi resident with assets in Sweden, and Al Barakaat, a charity for Somali refugees, claimed that his assets being frozen was unlawful.

Their property was seized without any court hearing or right of redress or allegation of wrongdoing.

The UN Security Council adopted resolutions under Chapter VII to freeze assets of people and groups associated with the Taliban and Osama Bin Laden. The EU adopted regulations to give effect and Sweden had given effect to the regulation.

The claimants were named in the resolution and regulation. They claimed the regulation should be annulled under TFEU article 263 and it was a breach of human rights.

In the opinion of Advocate General Maduro, EU law did not need to unconditionally bow to international law, if the consequence could be a violation of basic constitutional principles.

Referring to the International Market Bill, he argued Britain has the right to defend itself against Brussels’ diplomacy.

The prominent journalist wrote: “This is not to say that the EU is the most egregious scoff-law of the Western world but rather that it picks and chooses when it will be bound by international law like everybody else.

He concluded: “At the end of the day, Europe’s refusal to offer its immediate neighbour and security ally even a bare-bones Canada trade deal is a hostile posture.

“The EU could have opted for subtler statecraft, recognising that Brexit requires a fundamental rethink about the EU’s near abroad, a chance to create an outer ring of friendly trading nations that do not wish to be locked into an emerging unitary state. Instead it has driven the UK further away. Historians will judge this to have been a strategic failure of the first order.

“This final squalid slide towards an acrimonious rupture is sad for those of us who love l’Europe des Patries. But the UK has to defend itself against predatory diplomacy, deal or no deal.”

Analysis: Vice Presidential Pick Kamala Harris Was the ‘Most Liberal’ Senator in 2019

We might be physically distant, but we’re socially together

Sell My House To Pay Off Debt?

New Cookware from Self Reliance Outfitters

Are We Ready to Go Full Time with Our Side Gig?

Alcohol and junk food companies are exploiting the pandemic