Under the scheme, which was agreed earlier this year, the European Commission will borrow cash on the international market to hand out loans and grants to pandemic-hit industries. The European Central Bank has also bought hundreds of millions in bonds to keep interest rates from creeping up. But the “Frugal Four”, consisting of the Netherlands, Denmark, Sweden and Austria, were left furious at the plan originally touted by Mr Macron and Ms Merkel, as the group had been pushing for a smaller deal, and one made up only of loans, rather than a mix of loans and grants.

Austria’s Finance Minister Gernot Blümel has warned against using the EU coronavirus recovery plan as an entry into a debt union, and called for a quick return to solid finances once the pandemic is over.

But in an interview with German newspaper Welt, he issued a huge warning to bigger countries in the EU who “do what they want more often than the small ones simply because they can get away with it”.

When asked if there are ever times Germany and France have decided something and the other EU countries have agreed with them, Mr Blümel replied: “Different states have different interests and that’s why there are changing alliances on EU issues.

“We didn’t call ourselves the Frugal Five, others did. We speak out loud what others criticise behind closed doors: In the EU, the rules are regularly broken and that just doesn’t work. 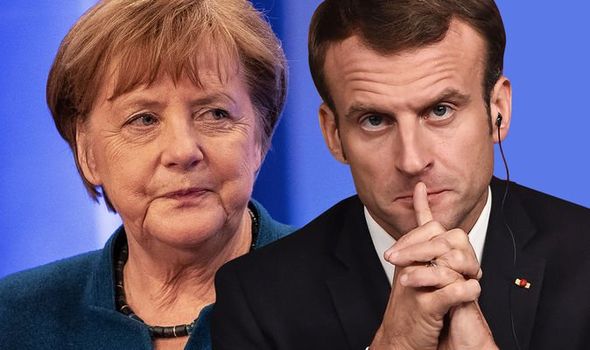 “The big countries do what they want more often than the small ones simply because they can get away with it. This is one of the reasons why there is resistance to the big ones.”

But the Austrian Finance Minister has launched into a stinging attack against Germany and France, warning the country’s leaders Ms Merkel and Mr Macron had “crossed a red line with their original plan”.

He said: “We were surprised that Germany supported the proposal from France.

“Merkel and Macron have crossed a red line with their original plan, and many people in Germany see it critically.

“These people were probably pleased with our attitude.”

Shortly after the crunch summit in July, Austrian Chancellor Sebastian Kurz said it had been possible to prevent entry into a permanent European debt union, but added there were fears spreading throughout the EU the bloc will have to take on substantial debt in the future.

Mr Blümel replied: “Such statements confirm the suspicion that not only we had from the beginning, namely that it is not so much about crisis management, but rather about pushing through ideology under the guise of a crisis. Such a stealth game is not good for cooperation in Europe.

“Anyone who wants a debt union should say so openly, then everyone would know.

“But to ask for solidarity and help first and to say those who do not help are inhumane and then to say that now we have the debt union; this is a dangerous game.

“This is playing into the hands of anti-Europeans in every country. I am glad that Angela Merkel sees it that way too.”

Mr Blümel also warned the Frugal Four is “not a closed club” and issued an open invite for other countries to join the Netherlands, Denmark, Sweden and Austria.

He said: “It’s not a closed club. We are happy when other countries join us and do not exclude anyone from the get-go.

“It is about a basic attitude to adhere to the existing rules and to pursue solid finances in the long term.

“Many EU countries have this or a similar economic policy stance. Finland is always there, but other countries also have sympathy for the attitudes we represent. Not everyone says this as clearly as we do.”

Rand Paul, wife swarmed by protesters while trying to leave the RNC

Why Biden’s Lead Will Evaporate