Earlier this week, MPs voted on a controversial new bill published by the Government. The UK is currently in a transition period that keeps it bound to the EU’s rules until December 31. The two sides are trying to negotiate a new trade deal that would come into effect once this period ends, but talks have continued to be characterised by perpetual deadlock.

With less than five weeks to go, the Government is essentially seeking to prevent disruption to trade between the four nations of the UK if no deal is reached with the EU.

However, the move has enraged Brussels and prompted a fresh rebellion within the Conservative Party.

European Commission President Ursula von der Leyen has set Prime Minister Boris Johnson a three-week deadline to ditch his plans or face financial and trade sanctions, with the clear suggestion that negotiations over a future relationship will fail unless the most contentious parts of the proposed legislation are removed. 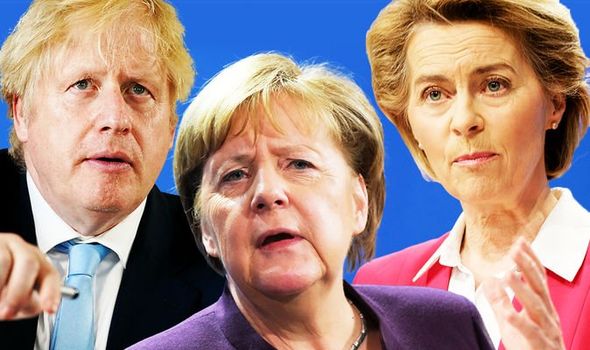 Speaking in Brussels yesterday, Ms von der Leyen said: “This withdrawal agreement took three years to negotiate and we worked relentlessly on it, line by line, word by word. And together we succeeded. And the result guarantees our citizens’ rights, financial interests, the integrity of the Single Market, and crucially the Good Friday Agreement.

“The EU and UK jointly agreed it was the best and only way for ensuring peace on the island of Ireland. We will never backtrack on that. This agreement has been ratified by this House and by the House of Commons.

“It cannot be unilaterally changed, disregarded or disapplied. This is a matter of law and trust and good faith.”

While it is true that if Mr Johnson went ahead with his plan, Britain would essentially break international law – a recent report by Steven Barrett, a Commercial Chancery barrister, reveals how Germany also recently broke international law but did not face any consequences.

This has been the cornerstone of the “whatever it takes” approach to preserve the euro set by the bank’s former president, Mario Draghi.

Before that, the German court took another extraordinary step.

It disregarded the judgment of the ECJ that validated the ECB decisions by labelling such a decision as ultra vires too. In its view, the ECJ manifestly went beyond the acceptable standards of legal interpretation.

In a single decision, two blows had been struck at the heart of European integration: its common currency and the primacy of EU law.

Mr Barrett wrote in a column for the Spectator: “What matters for our purposes now is that the EU have taken no steps to sanction or reprimand Germany.

“Certainly, no steps in law have been taken against them at all.

“Germany has not modified its constitution as a result, it has maintained its position in law.

He noted: “Now, this is not the same as the other arguments and is not politics.

“This is going back to our practice of law.

“For 800 years when faced with a novel legal problem we have looked to previous cases to find the legal solution.

“When we look for previous cases to copy, it is normal to look to other countries – in my area involving complicated issues around money/trusts/equity we often look to Australia.

“It is true to say we do not look to civil law jurisdictions, which is what Germany is, quite so often. But I see nothing in principle wrong with looking to Germany for guidance on how the UK should both best honour international law and protect our constitution.

Mr Barrett concluded saying that if Britain is to find a legal solution, then looking at an established western democracy who has “put more time and effort into its constitution” could be the best solution.

Live: The U.S. celebrates Independence Day with a fireworks display in Washington, D.C.

City of Louisville to pay $12 million to Breonna Taylor's family

‘Wear a Mask,’ Trump Urges Americans: ‘They Have an Impact’ in Stopping the Pandemic

Jim Jordan Opening Statement: “They Are Attacking Bill Barr” to Protect Themselves From “Obama Spying Operations”

How should Republicans address free speech concerns with big tech?