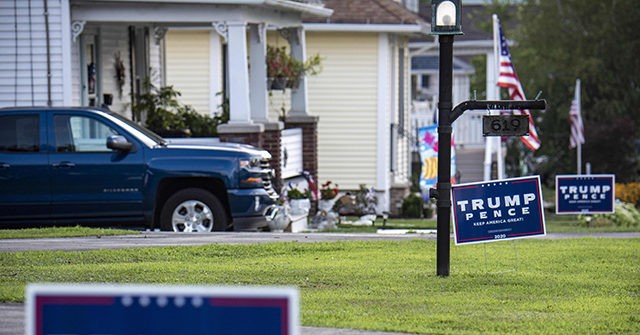 A resident in Pawley’s Island put the signs on his lawn but they kept disappearing, according to WRAL.

“The resident put a deer camera in his yard and got photos of the person damaging a sign in his yard by writing ‘Dump’ over Trump’s name on his sign,” the report said.

Members of the Georgetown County Republican Party posted photos they received of the alleged vandal on social media in hopes of identifying the person.

They later received calls from people who named the person and also the individual who drove him from the scene.

The South Carolina State Law Enforcement Division said it will determine whether Smith and his wife will face charges.

Smith announced his resignation in a statement read aloud during the board of elections meeting Wednesday night, according to WMBF:

I regret that a brief lapse in judgement (sic) on my part might become a distraction to the conduct of this very important election. Therefore, I hereby resign from this Board effective immediately. It has been an honor and a privilege to work with all of you. I am very proud of the 15 years I have been involved in Georgetown County elections and am sorry that it has to end like this.

Karol Anderson, who chairs the county Republican Party, told the Coastal Observer the Smiths should be held accountable for their alleged actions.

“People with a lot of responsibility should have a lot of accountability,” she commented.

The former chairman’s term was set to expire on December 1, according to the WRAL report.

Trump Says He Will Be Leaving Walter Reed on Monday Evening

MAGA vs. The Swamp #5 in the Drain The Swamp Series

Head of Operation Warp Speed: The Goal Is To Immunize The U.S. Population By 2021

Attacks on Trump, Claims of Victimhood Continue on Day 3 of DNC