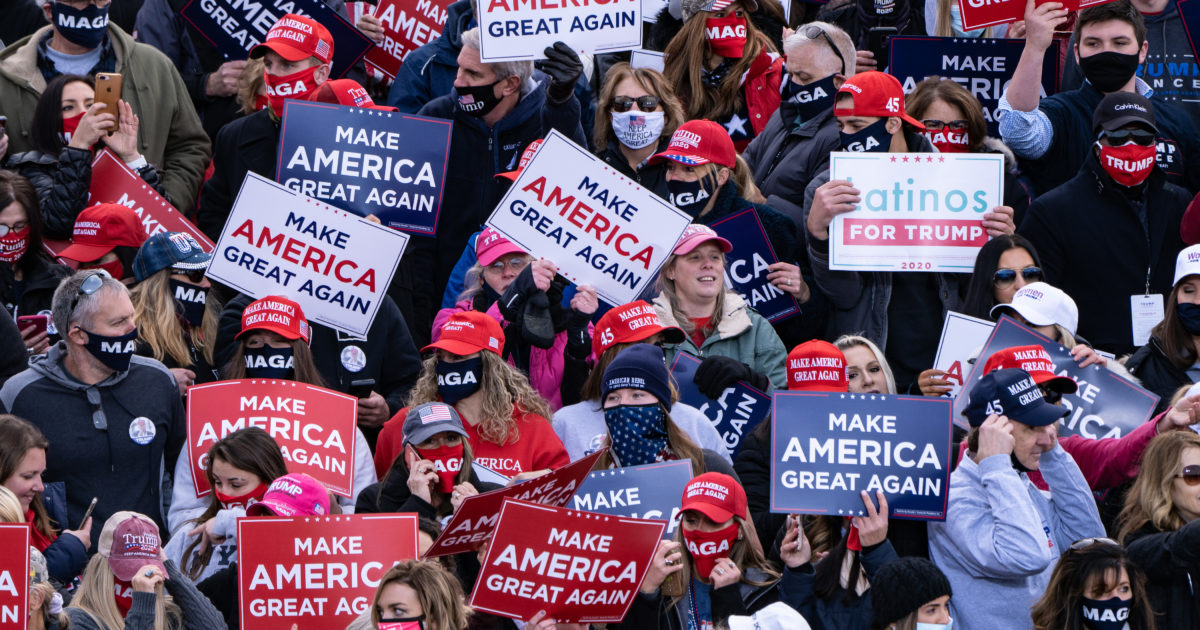 With November 2020 looming, Americans look forward to the end of a seemingly permanent election campaign and perhaps some reduction in the raging fever of national tensions that ail the country. Dream on. Even if we have a clear winner on election night, the selection of next year’s lucky White House resident seems bound to leave people more enraged than ever. Elections are no longer about turning out one officeholder and set of policies in favor of another with different schemes; they’re existential battles between political tribes who see their enemies as dangerous and evil.

Which is to say, awful officials are only symptoms. America’s divisive political culture is the disease and isolating the patients from one another may be the only treatment.

Just over half (51 percent) of all voters told Pew that they “think about politics as a struggle between right and wrong.”

So, we don’t have a modest disagreement over take-it-or-leave-it policies, but rather a Manichaean struggle (in the eyes of true-believing participants) for the fate of the nation. Which helps to explain why “among Americans who identify as Democrat or Republican, 1 in 3 now believe that violence could be justified to advance their parties’ political goals,” as Kalmoe wrote just weeks ago in an article co-authored with four other political scientists. “All together, about 1 in 5 Americans with a strong political affiliation says they are quite willing to endorse violence if the other party wins the presidency.”

But anticipation of violence isn’t predestination; it’s just as likely to be an extension of seeing opponents as “downright evil,” “like animals,” and likely to do “lasting harm to the nation” if put in charge. That is, shuffling warm bodies among elected offices won’t resolve the country’s tensions, because the source of the tensions lies in the people themselves, divided as they are into hostile tribes fighting to wield power over each other. No matter who wins office, the people on the other side will still be there and represent a continuing threat in the eyes of opponents.

We start with this commitment: We will not demonize or question the decency of Americans who vote differently from us. When we oppose their political views we will say so with vigor, but we won’t castigate them as persons.

It’s a lovely sentiment that seems too little, too late, by many years.

Still, there’s a long distance between despising your neighbors and fighting them in the streets. The next few years could look less like Spain in the 1930s than like an exaggerated and more chaotic continuation of recent events (including, unfortunately, some degree of violence).

Among those events have been the tendency of localities at odds with federal and state authorities to go their own way, ignoring laws and dictates with which a majority of residents disagree. This isn’t a new phenomenon—Norman Vroman, the Libertarian District Attorney of Mendocino County, California, drew national attention two decades ago for deemphasizing laws against marijuana. Recent years have seen the rise of the sanctuary cities movement of localities refusing to help federal authorities enforce immigration laws. Towns and counties opposed to restrictions on self-defense rights have similarly refused to enforce gun laws that are unpopular with their residents.

“The Second Amendment sanctuaries movement borrows from the language and rhetoric of the immigrants’ rights movement. Insofar as the enforcement of state and federal law often depends on the cooperation of local officials, the movement also deploys some of the same strategies: passive non-cooperation, indirect resistance, and rhetorical disobedience,” Richard Schragger of the University of Virginia School of Law wrote earlier this year.

“The pandemic has reinforced the themes of polarization and punitiveness governing contemporary intergovernmental conflict,” Greg Goelzhauser and David M Konisky wrote this summer in The Journal of Federalism. “The partisan divide continues to permeate most dimensions of American federalism. Positions on public policy and legal questions are ideologically divided.” They describe state-level defiance and the federal government’s retaliation in response as “punitive federalism.”

The legal basis for ignoring commands from on-high varies, but that’s a concern for law professors. For most people, ignoring the commands of governments in the hands of “downright evil” enemies isn’t a legal question, but rather a matter of survival.

Beyond a matter of survival, though, local disregard for despised laws and policies might be a pressure-release mechanism and a potential curative. As a de facto way of decentralizing authority, ignoring dictates from state and federal governments in the hands of the “enemy” offers a peaceful resolution of disagreements and tensions that aren’t going anywhere after the upcoming election. You don’t have to fight “downright evil” opponents if you can ignore them.

Formally decentralizing authority in this country would be a positive development in many ways, but a hard sell to political victors unwilling to let their opponents off the hook. Informal defiance of central authority is bound to antagonize officialdom and upset legal experts, but it might be the best medicine for our sick political culture. Unsanctioned it may be, but a future of individuals and localities paying no mind to the powers that be offers a nonviolent means of resolving disputes that would otherwise be settled in much less pleasant ways.

Are the Protests Mostly Peaceful?

Coronavirus pandemic could result in serious setback for global fight against tuberculosis, WHO warns

We Are Not a Racist Country: Larry Elder with Heather Mac Donald

Where Are the Parents of Kids Abandoned at the Border?

Does COVID-19 Imply an End to the Epoch of Science?

Do You Feel the Draft? Nobody Is Talking About This

How Technology Has Evolved — And Cost The GOP Its Edge

Judge Barrett is asked about the Emoluments Clause litigation