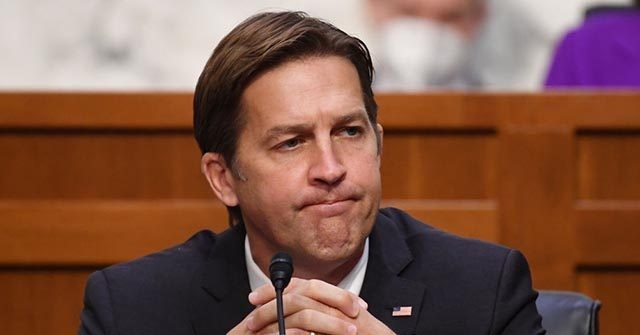 President Donald Trump on Saturday ridiculed Sen. Ben Sasse of Nebraska after a tape of the Republican criticizing the president leaked to the media.

“The least effective of our 53 Republican Senators, and a person who truly doesn’t have what it takes to be great, is Little Ben Sasse of Nebraska,” Trump wrote on Twitter.

In a call with Republican constituents, Sasse criticized Trump for “the way he kisses dictators’ butts” and “ignores” Hong Kong freedom fighters as well as Uyghurs in Chinese concentration camps.

Trump noted that Sasse paused his criticism of the president during the Republican primary in Nebraska until he got Trump’s endorsement.

“Sen Sasse was as nice as a RINO can be until he recently won the Republican nomination to run for a second term,” Trump wrote. “Then he went back to his rather stupid and obnoxious ways.”

…Nomination to run for a second term. Then he went back to his rather stupid and obnoxious ways. Must feel he can’t lose to a Dem. Little Ben is a liability to the Republican Party, and an embarrassment to the Great State of Nebraska. Other than that, he’s just a wonderful guy!

Sasse also said that Trump mistreats women and “spends like a drunken sailor.”

“He mocks evangelicals behind closed doors. His family has treated the presidency like a business opportunity. He’s flirted with white supremacists,” Sasse continued.

Trump warned that Sasse was headed the same way as Sen. Bob Corker of Tennessee, “Liddle’ Bob Corker,” and Sen. Jeff Flake of Arizona, “the Flake,” both of whom retired rather than ran for reelection.

“Sen Sasse could be next, or perhaps the Republicans should find a new and more viable candidate?” he asked.

….practically nothing. Both Senators became totally unelectable, couldn’t come even close to winning their primaries, and decided to drop out of politics and gracefully “RETIRE”. @SenSasse could be next, or perhaps the Republicans should find a new and more viable candidate?

Warren on Court-Packing: 'Everything Is on the Table'

The Foreign Policy Questions Trump and Biden Should Answer

Man Arrested in Alleged Burning of a Boston Drop Box: ‘Disgrace to Democracy’

Trump repeatedly attacked his former ally the Drudge Report, instead boosting other right-wing outlets more favorable to him

Biden Calls on Trump To ‘Step Down’ Due To Pandemic Response

Exclusive–Burgess Owens: No One 'More Ready' for SCOTUS than Amy Coney Barrett

Caucuses Omit ‘Under God’ From Pledge Of Allegiance During DNC