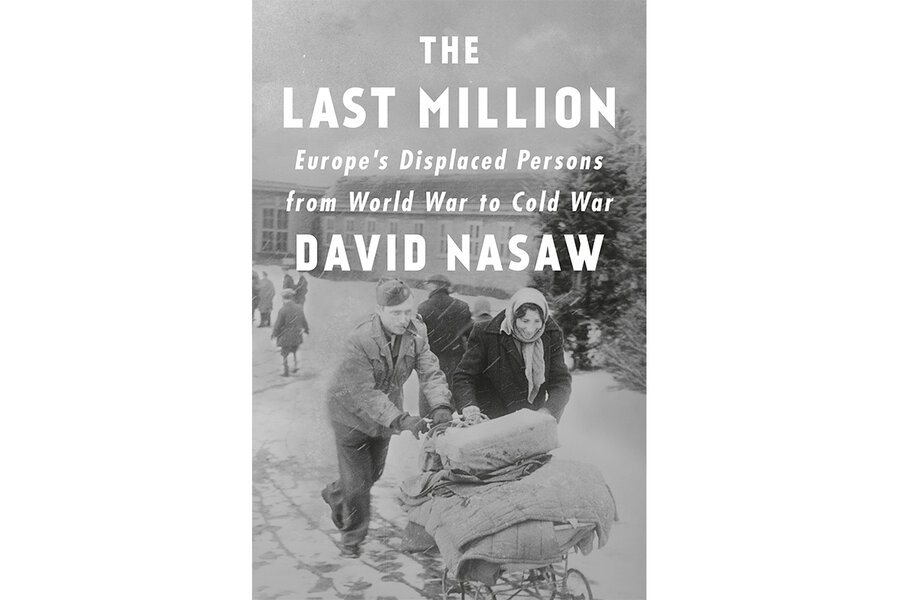 The scattered remnants of European Jewry began to emerge in the summer of 1944 from Nazi concentration camps and forest hiding places.

But their liberation by Allied troops was just the beginning of a new struggle that lasted long after the war in Europe officially ended in May 1945. Many more non-Jews from places like Ukraine, Poland, and the Baltic states – fearing communist repression back home or retribution for collaborating with the Nazis – soon joined them in limbo.

Historian David Nasaw tells the story of those with nowhere to go when the fighting stopped, who landed in the first modern refugee camps, in “The Last Million: Europe’s Displaced Persons from World War to Cold War.”

“They stand as living testimony to the inescapable truth that the dislocations and displacements of the war in Europe did not magically end with the cessation of hostilities, but bled into the postwar period and the Cold War that followed,” Nasaw writes.

Nasaw, a two-time Pulitzer Prize finalist, has once again produced an extraordinarily well-researched book that is well worth reading, and it’s on a topic of particular interest to me.

When my mother was a baby, she and my grandparents arrived at a displaced persons’ (DP) camp in Bensheim, Germany, in the summer of 1946. They joined a massive influx of Jews into the American occupation zone prompted by a new wave of anti-Semitic violence in their native Poland. The violence was fueled in part by the unwillingness of Poles to part with Jewish property they’d taken during the war.

My family spent less than five months living in the classroom of a former private school, a brief way station before sailing on a converted U.S troopship to New York and ultimately starting their lives over on a New Jersey chicken farm.

But as Nasaw writes, most of the quarter million or so Jewish DPs weren’t as fortunate. At first, the U.S. occupation wouldn’t even separate Jewish victims of Nazi horrors from those who might have been their tormentors just months earlier.

Eventually, Jewish DPs were allowed to form their own “island communities” where they established schools, sports leagues, newspapers, and courts. Survivors racing to make up for all they had lost also began to marry and have children at extraordinarily high rates.

It proved somewhat easier to offload non-Jewish DPs because they were described as a solution to European and South American labor shortages or Australian underpopulation.

Many Jewish DPs dreamed of refuge in Palestine, a prospect anathema to Britain because its leaders sought to avoid circumstances that would inflame Arab-Jewish tensions in a tiny but explosive corner of its crumbling empire. The British were willing to let in only 1,500 DPs each month, prompting efforts to reach Palestine illegally.

Almost 100,000 resettled in Israel during the fledgling Jewish state’s first year in existence. Nasaw writes that the exhilaration of finally leaving Germany gave way to disappointment for many who found themselves once again in a war zone that produced its own mass wave of displacement among Palestinians.

The U.S. at first refused to raise decades-old racist quotas that strictly limited the number of Eastern Europeans allowed to emigrate. Sympathy for the victims of what later became known as the Holocaust still couldn’t overcome fears about what some Americans saw as an invasion of undesirable Jews.

Some legislators also expressed fear that the ranks of DPs were full of subversive communist (or at least pro-Soviet) elements.

“We want good blood to come to this country. But we do not want any ‘rats’ – we have enough of them,” Senate Judiciary Chairman Alexander Wiley, a Wisconsin Republican, warned during the 1948 debate over legislation designed to increase DP visas, echoing more recent pushback against taking in victims of the Syrian civil war.

Among the DPs Nasaw chose to quote is the grandmother of President Donald Trump’s son-in-law and senior adviser, Jared Kushner. “Nobody opened their doors to us,” Rae Kushner said in an oral history interview. “Nobody wanted to take us in.”

Most Jewish DPs didn’t qualify under the watered-down DP Act reluctantly signed by President Harry Truman in 1948. The “blatantly antisemitic” law excluded those who entered Germany, Austria, or Italy after 1945 – the period when most Polish Jews arrived – and set aside a majority of visas for refugees with agricultural experience or from nations annexed by the Soviets.

A second DP Act enacted two years later attempted to right some of those wrongs, although by then few Jewish DPs remained in Europe.

And because Cold War fears about communist infiltration had long since eclipsed concerns about Nazi collaborators, more than a few of the refugees were war criminals.

Seth Stern is a Bloomberg Law editor working on a book about Jewish displaced persons who settled on southern New Jersey chicken farms.

Watch what happens when crocodiles share a beach with hippos

The Role of Allies and Partners in U.S. Military Strategy and Operations

From Pandemic to Court Packing, When Will Harris' Non-Answers End?