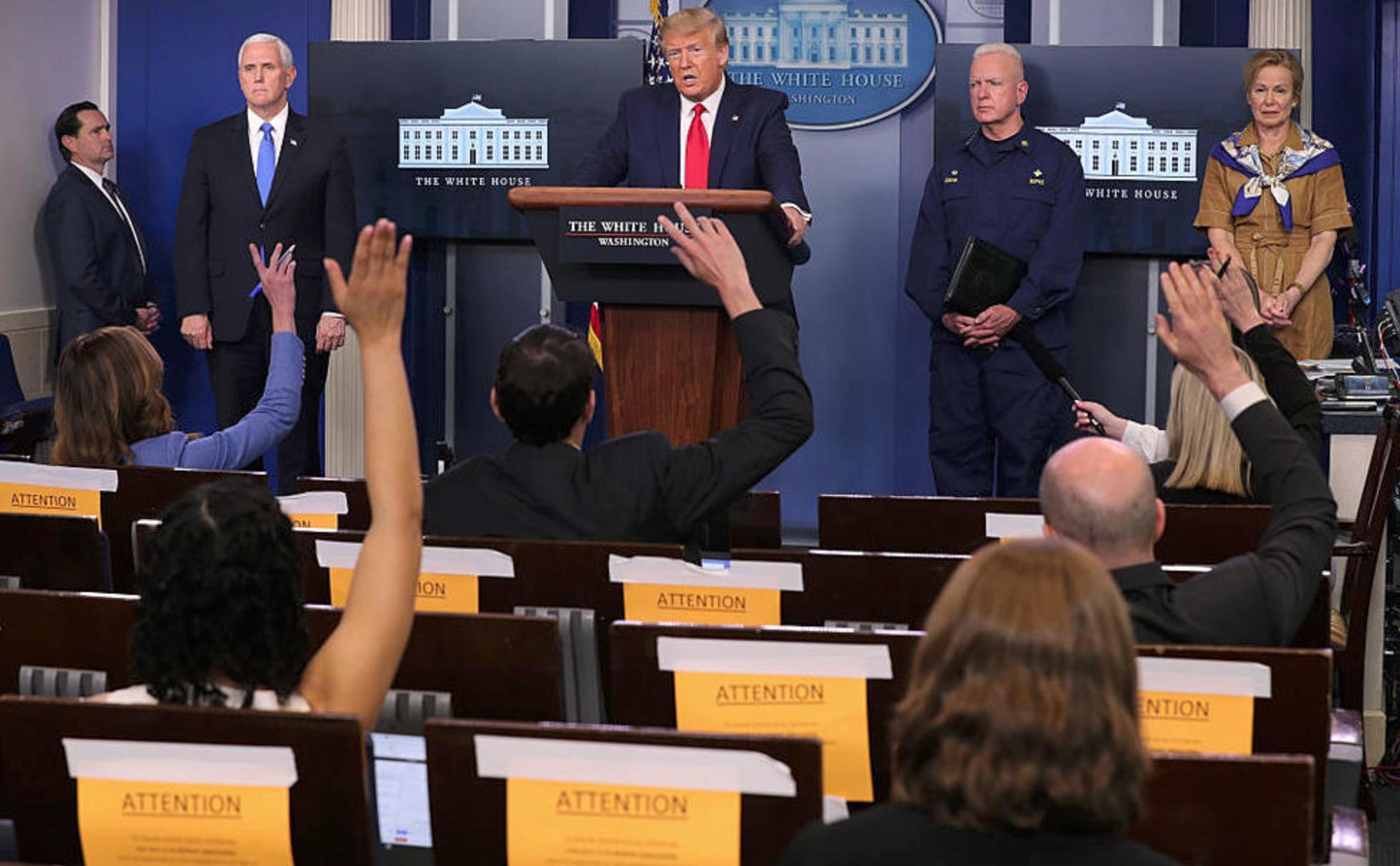 President Trump has to have the patience of a saint.

I would have tired of beating, shaming, defrauding, and exposing these media idiots years ago. It’s pointless to meet or speak with the media as they twist and spin every word.

Trump is frustrated with the daily press briefings and was talking about stopping them altogether. I have a better solution.

What is the purpose of having White House News Conferences when the Lamestream Media asks nothing but hostile questions, & then refuses to report the truth or facts accurately. They get record ratings, & the American people get nothing but Fake News. Not worth the time & effort!

MEDIA CORPS SHOULD BE DISBANDED

It’s not just the media ignoring their jobs to bash Trump, it’s the Democrats on the whole not doing the jobs they were elected to do, but instead going all out to get Trump out of their blind hatred.

The Whitehouse press corps should be disbanded and only legitimate journalists invited. Instead of the daily press briefing, Trump could do a virtual town hall with questions from real people with real questions who want information.

The state-run media has had a difficult four years. The last election cycle proved Lincoln was correct that you can’t fool all the people all the time. Where does that leave us?

It’s been an election year, and the media will never let go. The press hasn’t been struck dumb; they exist only as political dogma. They are following through on the adage that you should never let a crisis go to waste. And if it isn’t a crisis, they will help create one with fake news.

TRUMP HAS LEVELED THE PLAYING FIELD

The media will still spin the facts, but they exist for one reason only. They are part and parcel of the cabal who wish to destroy the Constitution and enslave the public. Ironically, they would be the first to go after the fall. As soon as the virus crisis blows over, they will start playing the Russian collusion hoax again, claiming it was never disproved. It was disproved, but they need something to fill the empty airwaves. One thing they will never report or allude to was how many of them cashed their Trump checks that they will never admit to doing.

Several years ago, Mark Steyn wrote a book, “America Alone”. In it, he proposed that a society could become too stupid to survive. Sadly, this ‘pandemic’ has provided empirical evidence that he was entirely correct in his hypothesis as America has demonstrated it in spades!

TRUMP CONTINUES TO WORK HIS PLAN

I think President Trump is like a large portion of the population. He is afraid for the safety of this nation. Each time the “opposition” strikes, they get deeper and meaner. He is the standing President, and he knew that China was on the attack. How deep and how widespread was it? No one knew, but Trump was/is trying to keep blood off his hands.

His economic shut down has been mild compared to what he could have done. He left open enough to keep Americans moving and fed. Was it pretty? NO. Would another “yellow fever epidemic have been pretty? Well, we all know the answer to that.”

I, for one, will always believe that he has engaged certain governors to open up as much as possible while keeping himself distant from their actions. If they prove that our country can operate on a full-throttle scale, then the governor wins, and Trump wins by standing by and watching….now, it’s a full go!

Don’t underestimate the strategy to open as quickly and thoroughly as possible.

The World Has Gone Insane… Here’s Why

Donald Trump Jr. Reveals Why His Dad Has Scaled Back COVID-19 Press Briefings: ‘You Can’t Win’ With Mainstream Media

BREAKING: Former FBI General Counsel James Baker Has Flipped! Durham is Building Conspiracy Case on All of Those Who Lied to the Court!

JUDY SHELTON..PLANNING TO CONFIRM TO THE FED (SHE IS A STAUNCH GOLD BUG)