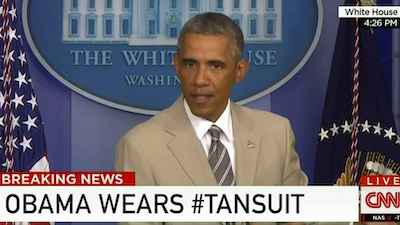 In her excellent AT piece on the FBI’s recently released debriefing notes on the infamous January 5, 2017 White House meeting, Andrea Widburg begins by noting that the breaking story is so big that both the New York Times and Washington Post promptly ignored it.

Suppression of that sort appears to be a reliable gauge on how damaging the news is for privileged actors in the Democrat Party.  Normally, the NYT will respond with immediate damage control buried somewhere under page one, spinning the news to create the narrative for other news outlets.

But in this instance, the spin cycle is a little more challenging.  This requires some real effort and creativity.

Andrea gave the partisan media their angle for the bombshell of President Obama directing the FBI to ensure that it puts “the right people” on the Flynn persecution: “The phrase ‘the right people’ also raises the possibility that Obama was not merely ensuring that a delicate project got proper staffing. Instead, it suggests he was making sure a conspiracy stayed within a small group of trusted Deep State operatives.”

The narrative for the establishment media has to be that Obama was referring to having the right people in the sense of having true professionals to ensure that everything was done by the book for such a sensitive matter.  Mr. Obama didn’t want to come across as being political, let alone directly engaged in a criminal enterprise against the president-elect.

Conservatives Know That Teachers Unions Are Bad. So Are Police Unions

Coronavirus World Map: Tracking The Spread Of The Outbreak

Superheroes march in Mexico City for help amid COVID-19

How to Read Covid-19 Research (and Actually Understand It)

American billionaires got $434 billion richer during the pandemic

What is Medicated Chick Starter – Do My Chicks Actually Need It?