A record one-day rise in the number of new coronavirus cases around the world has been recorded by the World Health Organisation. Some 307,930 confirmed infections were reported over 24 hours, the highest yet seen during this pandemic. More tham 29 million cases have been reported since the beginning of the outbreak with 924,831 deaths. And of these figures the UK has the 14th highest number of cases, the third highest in Europe behind only Spain and France. And medical health experts warn further lockdown measures could be enforced if these rising numbers are not kept in check.

WHO director-general Tedros Adhanom Ghebreyesus said the average number of daily cases in Europe is now higher than during the first peak of the pandemic, adding Europe is not “out of the woods” yet.

He said: “Lives and livelihoods have been lost, the global economy is in recession and social and political fault lines have been exposed.

“The European region is no exception. “Many of your countries have been the among hardest hit. We are by no means out of the woods.

“Fortunately, the number of deaths appears to be remaining at a relatively low level – for now. But every death is a tragedy, and there can be no room for complacency.

“If we do not keep transmission in check, more people will lose their lives, and there is the real risk of reintroducing so-called lockdown measures that have been so costly.” 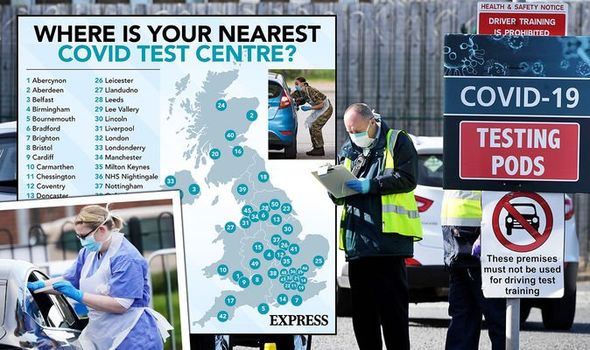 Covid test centre near me – where is your nearest test centre? (Image: GETTY)

Covid test centre near me: These kits are handed to you in your car at the test sites (Image: GETTY)

Covid test centre near me: Drive thru test sites have popped up across the UK (Image: GETTY)

In the UK, new rules have come into force today allowing no more than six people to meet – ether inside or outside – at one time.

Those who gather in groups of more than six people could face fines from £100 for a first offence, doubling on each further offence up to £3,200.

The change to the rules comes after the R-rate rose to between 1 and 1.2 for the first time since March as cases began to double every seven to eight days.

Wales’ health minister Vaughan Gething today warned the pattern of increasing COVID-19 cases is “similar to the situation we faced in early February”.

He said “action should be taken now to prevent significant harm or another full lockdown”.

Covid test centre near me: Testing officials hand you a pack inside your car (Image: GETTY)

Covid test centre near me: The test involves a rather unpleasant swab up your nose (Image: GETTY)

The rise in cases does not necessarily mean the virus is peaking again, as testing has increased exponentially since the UK went into lockdown back in March.

Anyone suffering from symptoms is now urged to get tested – a marked difference from the start of the outbreak when tests were in limited supply.

You can also get tested if asked to by your local authority, if you are a key worker, or if taking part in a Government trial.

There are some 50 sites across the UK where you can get a test – as shown in the map below.

Covid test centre near me – map shows the closest place to get a coronavirus test (Image: EXPRESS – GETTY)

These regional sites have been set up by the Department for Health and Social Care (DHSC), who has also established an additional 25 test sites for NHS staff.

And if you can’t make it to a test centre, you can order a free home test kit from the NHS website.

Covid test centre near me: About 227,465 test are recorded each day (Image: GETTY)

But in recent weeks, testing has reached peak capacity with labs struggling to deal with the rising numbers.

Mr Gething said these issues with the UK Government’s Lighthouse Labs were “plainly not acceptable”.

He said: “I know there are a number of cases where people are trying to book a test at drive-in centres and finding them either fully booked or being told to go to a centre many hundreds of miles away,” he said.

“I’ve spoken with the UK Secretary of State about this, including on Saturday, when we agreed to immediate action to protect capacity in areas experiencing higher incidence and spikes and to make sure that unilateral restrictions are not placed on Wales again.

“But we have to see an urgent and sustainable solution to these ongoing issues affecting the Lighthouse Lab system.”

Scottish First Minister Nicola Sturgeon, too, said she has “serious concern” with the “backlog of test results”.

Covid test centre near me: Daily cases as of September 13 update (Image: EXPRESS)

Speaking this afternoon, the SNP leader urged Health Secretary Matt Hancock to share the “full scale and nature of issues they are facing” as testing laboratories.

She added: “At the moment, despite the case resurgence in Europe, we have not seen death rates as high as it was in the spring.

“This can be linked to a variety of reasons including larger proportion of cases among young people who tend to be less severely impacted; protections in place for the most vulnerable; increased testing; better care for severe patients

“As winter approaches, and other respiratory pathogens start to circulate including seasonal influenza, we can expect increased risks to older people at this time of year.”

Deep State Battle Cause Danger In the Markets | Get Prepared Now

Teachers, Show Us What Your Classrooms Look Like Right Now

Red Alert: Iranian Launch Missiles At Mock US Ship – Watch Out For Heart Damage After COVID

Hong Kong to suspend some legal cooperation with U.S.

Neil Young sues Trump campaign over use of famous tunes