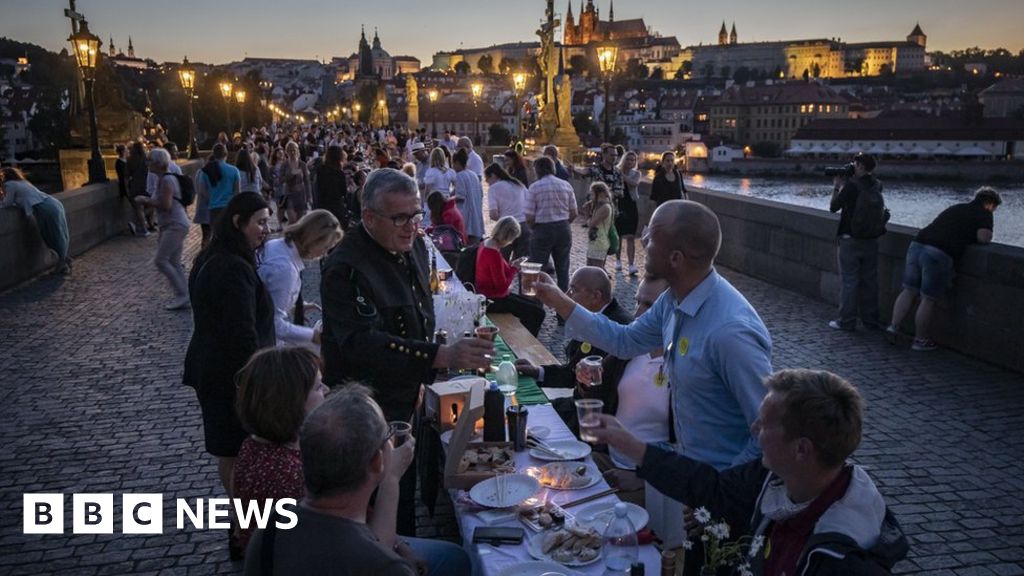 The World Health Organization (WHO) warned this week that the pandemic was not even close to being over, but in the Czech Republic, a party has been held to give the coronavirus a “symbolic farewell”.

Thousands of guests sat at a 500 metre-long (1640ft) table on the Charles Bridge in Prague on Tuesday sharing food and drinks they had brought from home.

Guests were encouraged to share with their neighbours and there was no social distancing, something people in countries under lockdown will find hard to relate to.

There have been fewer than 12,000 infections in the Czech Republic, a country of 10 million. About 350 people have died.

The event’s organiser said the celebration was possible due to a lack of tourists in the famously charming city.

Spaces for the event, which had to be reserved, were fully booked.

One attendee, Galina Khomchenko-Krejcikova, said she found the event on Facebook and “thought it was interesting”.

“I just finished a night shift so I didn’t have time to prepare anything,” she said. “But we brought some wine and snacks we found at home.”

The Czech Republic was quick to enforce a lockdown and has managed to avoid the worst of the pandemic.

Last week, the government permitted public gatherings of up to 1,000 people. Swimming pools, museums, zoos and castles can now open without limits on the number of visitors.

Restaurants, bars and pubs have been allowed to serve people indoors for a month now.

‘A sense of optimism’

Above the music and the clinking of cutlery one heard a most unusual sound for this iconic landmark: people speaking Czech.

Largely free of foreign tourists, Charles Bridge was transformed on this gloriously sunny evening into one long dining table – as people gathered to mark what organisers described as the end of a period of crisis, although everyone here freely admitted that such celebrations might well turn out to be premature.

Certainly however there is a sense here that through swift and decisive action Czechs have dodged a bullet.

Relaxing the lockdown has not sent the numbers soaring; there are several local outbreaks far from Prague, which is only recording around 15 infections a day. There was a palpable sense of optimism on the bridge this evening as people remembered what it was like… to live again.

The Role of Civil Society in Times of Crisis

Coronavirus update: ‘The worst is yet to come,’ WHO official says

National Day of Prayer: Remembering Those Suffering Worldwide for Their Faith

Job and income amid COVID-19

Is He, Or Isn’t He? The World Needs to Know