The limited inquiry found MPs broke the strict curfew on drinking at the Commons bar on October 5. House of Commons bosses came under fire after they were accused of covering up parliamentarians breach of the UK’s coronavirus curfew last week. The Health Secretary is alleged to have been among the flouters according to a senior Tory MP, but officials did not ask the minister if he was in attendance and he has refused to confirm the reports.

Charles Walker, the Tory MP behind the Commons curfew probe, confirmed MPs had breached their own virus guidelines.

He said: “It happened and it should not have happened.

“It does seem there were drinks being consumed after 10pm on that Monday night in the Smoking Room.”

Mr Walker then stressed coronavirus rules applied to the Commons bar, but refused to identify the MPs who flouted the rules as it would be “invidious”. 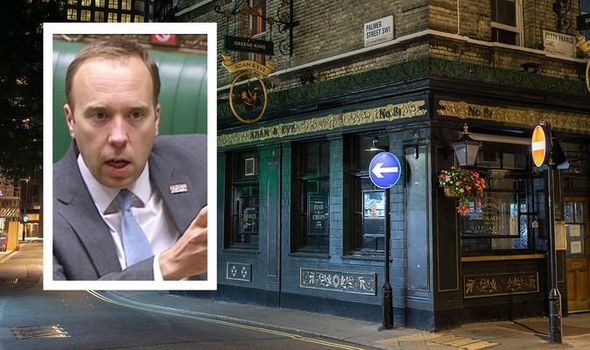 Coronavirus news: MPs have been found to have breached the UK’s coronavirus curfew (Image: PA / GETTY)

He added: “I don’t know that should be so. If they are trying to apply rules in a rigorous way, why shouldn’t they ask the staff which MPs they were serving?”

John Mann, former Labour MP, attacked the Commons bosses and said: “This does smack of a cover-up. We in Parliament have a duty to respect the rules we lay down for everyone in the country.

“But more than that, we have a duty to be seen to be respecting the rules.”

Coronavirus news: Under current guidelines pubs are not allowed to be open past 10pm (Image: PA)

Coronavirus news: Matt Hancock was alleged to be among the MPs breaking the curfew (Image: PA)

Mr Hancock was alleged by an anonymous Tory MP to have been among the ministers breaching the 10pm curfew.

The Mail on Sunday reported last week the Health Secretary stayed in a Commons bar until “at least 10:25pm”.

He was also said to have made a joke at the expense of Public Health England over technical failures while acting “like a pantomime dame”.

Mr Hancock was reported to have said: “The drinks are on me, but Public Health England are in charge of payment methodology so I will not be paying anything.”

A spokesman for Mr Hancock did not deny that the minister made the joke, but said he did not break coronavirus guidelines.

While the spokesman accepted Mr Hancock had been in the Smoking Room that night, they added “no rules had been broken” and he “departed the parliamentary estate to go home” after taking part in a Commons vote at 9:40pm.

The Mail on Sunday said they had asked the representative whether Mr Hancock returned to the bar 30 times with no further information.

The spokesperson responded three times to say in reply: “I would refer you back to the previous statement that I provided.”

While 44 Conservatives voted against the bill, they were defeated by 299 votes to 82.

Most Labour MPs abstained from voting on the bill with only 23, including Jeremy Corbyn, saying no to the curfew.

The UK reported a further 16,171 cases and 150 deaths from coronavirus yesterday.

In one of the world’s largest slums, the fight against the coronavirus has turned into a struggle to survive

‘That’s not going to bring my brother back’: George Floyd’s brother calls for end to violence

BREAKING: Smoking Gun Email from Hunter’s Laptop Proves Bidens Were Paid to Shut Down Burisma Investigation and Make It Go Away

How to Use an Israeli/ trauma wound bandage ? .

SIGN UP FOR OUR LIVE EVENT ON WEDNESDAY: How to invest during a volatile election season

ROBERT GREENE – THE LAWS OF HUMAN NATURE: How To Detach From Your Emotions & Master Self-Control

Otters are eating the hearts, livers and sex organs of SHARKS off the coast of South Africa