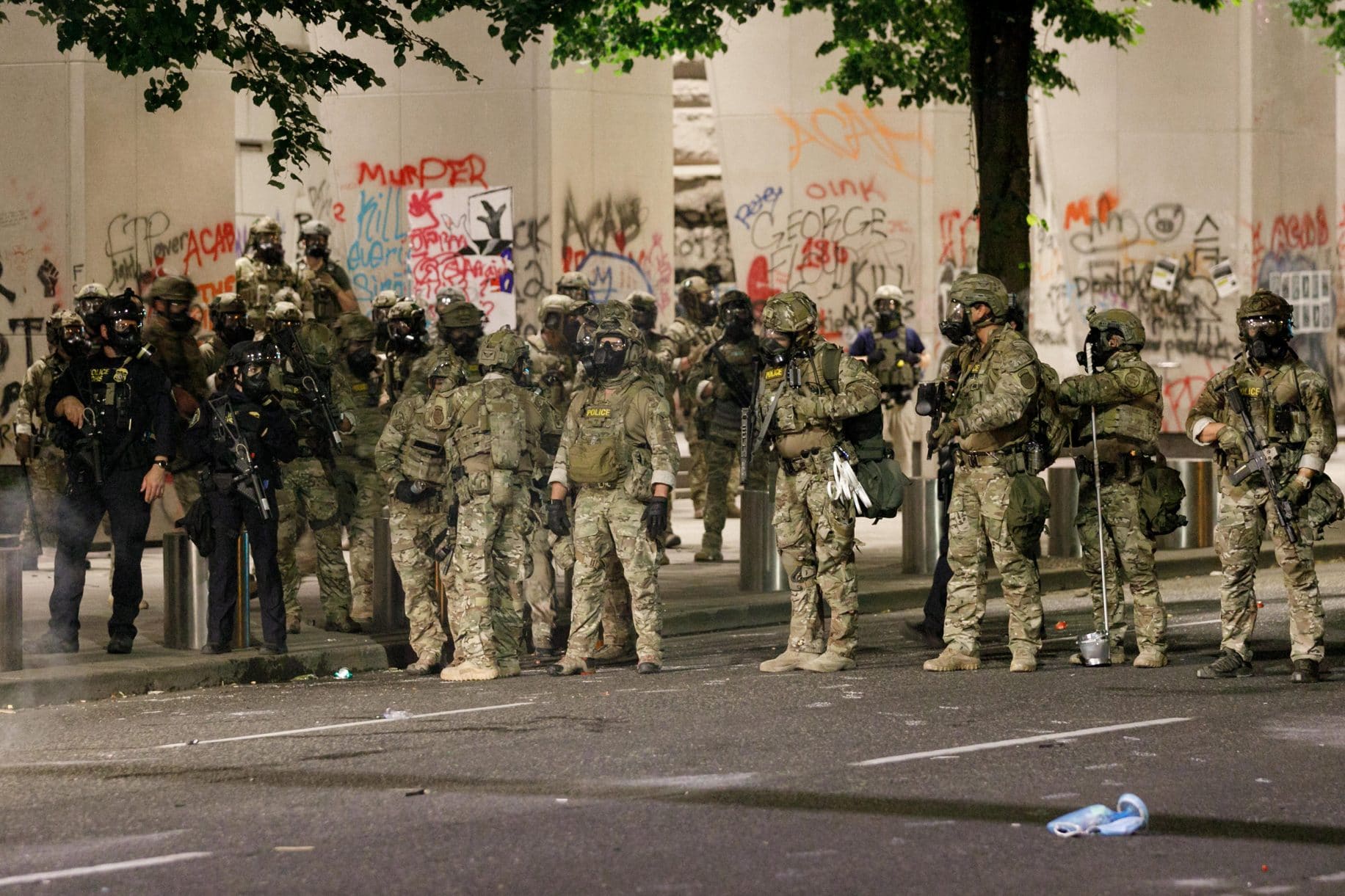 The cities of Portland and Oakland have filed a suit against the federal Departments of Homeland Security and Justice, alleging both have engaged in unconstitutional overreach of federal law enforcement in response to social justice protests.

The suit cites the deployment of federal officers “either secretly or with little warning” to Portland, the continued authorizing of special deputy U.S. Marshal status to Portland police despite Portland’s objections, the deploying of federal law enforcement to non-federal property with “virtually limitless jurisdiction,” and the erecting of a fence around the Mark O. Hatfield United States Courthouse in a city right-of-way without a permit.

The 48-page suit alleges the federal practices mark a “monumental policy change” that harms the cities’ abilities to safely govern and police, and has only contributed to further civil unrest. Past local collaborations with federal law enforcement have been voluntary and consensual, the suit notes.

“As local governments, Plaintiffs have independent police forces; community relationships; and locally-determined policing policies, practices, and procedures. Plaintiffs’ police forces have always been able to expect when and how federal law enforcement agents could assert federal powers within their jurisdictions,” attorneys wrote in the suit. “The use of deployments and operations violating established constitutional parameters, politically motivated interventions, and lawless commandeering of local law enforcement are unconstitutional and unauthorized in part because of the havoc such actions impose on local jurisdictions and the innumerable ways in which these deployments run roughshod over the longstanding federalist balance of the general policing power.”

The suit, filed in the U.S. District Court in Northern California late Wednesday, comes 16 days after the Oregon’s U.S. Attorney announced that the U.S. Marshal would not cancel the federal deputization of certain Portland police, state troopers and Multnomah County sheriff’s deputies. It also falls as protests have occurred nightly in Portland for more than 100 days since shortly after the May 25 death of George Floyd, a Black man who was killed after a Minneapolis police officer knelt on his neck.

The deputization of 56 Portland officers and 22 county deputies is set to last until Dec. 31, according to the U.S. Attorney’s Office, despite the Portland mayor’s request for a halt to the designation.

Oregon State Police Superintendent Travis Hampton had requested the federal powers for the local officers after Gov. Kate Brown tapped him to lead the police response to the weekend rallies along with Multnomah County Sheriff Mike Reese under an emergency executive order.

Portland City Attorney Tracy Reeve wrote to Oregon’s U.S. attorney on Sept. 29, clearly asking for the federal powers bestowed on Portland’s 56 officers to be withdrawn, following the weekend of the Proud Boys rally in the city. No one from the U.S. attorney’s office or any other federal agency responded to Reeve or city officials, the suit said.

“The practice of continued deputation of Portland’s officers limits the City’s law enforcement discretion, creates potential conflict between defendants and Portland over the use of tactics of Portland’s own officers and other law enforcement personnel, and unlawfully usurps the legislative and governance prerogative of local officials,” the suit said.

Though local officers in Oakland haven’t been federally deputized, Oakland city officials are concerned the same could occur in their city and joined in the suit in an effort to thwart that possibility.

In response to the federal steps taken in Portland, Oakland’s City Council on July 28 adopted a resolution authorizing the city attorney to take “any and all lawful necessary steps” to protect the rights of the city “against President Trump’s threats to take actions that result in harm to the people of Oakland,” or against any federal officers’ actions.

Both cities’ police agencies are under negotiated settlement agreements with the federal Justice Departments, which require use of force policies that are much more restrictive than that governing federal law enforcement, according to the cities’ lawyers.

The suit cites Trump’s “threats and warnings,” including statements suggesting that he would send law enforcement to polling places on Election Day.

The suit alleges the federal agencies have violated the 10th Amendment’s separation of powers, arguing that public safety is reserved as a state police power.

“Long-established principles of federalism, paired with congressional limitations, restrict the ability of the federal government to unilaterally deploy domestic military or police interventions,” the suit said. “The motivation animating Defendants’ Policy is the ‘takeover’ of City police forces and powers, and is untethered to strictly federal interests or activities.”

The suit also claims that Homeland Security Acting Secretary Chad Wolf, who was not nominated by the president or confirmed by the Senate, is unlawfully serving in his role, making his orders governing federal officers in Portland void, in violation of the Administrative Procedure Act.

Wolf has cited a section of the Homeland Security Act of 2002 , saying it gives the department’s secretary the power to deputize other federal agents to help the Federal Protective Service safeguard U.S. government buildings such as the federal courthouse in Portland.

Federal officials have said in court papers filed in federal court in Portland that additional federal law enforcement were sent to Portland in early July under what was dubbed “Operation Diligent Valor,” and that withdrawal “will depend on unknown future circumstances in Portland and presence of any threat to the federal judiciary or property.”

The suit urges a judge to halt the federal agencies’ actions, declare them unlawful and an abuse of discretion and award each city costs for the expenses. Portland has incurred extra costs, including millions of dollars in police overtime, as a result of the enhanced federal deployment officers in July, when protests increased in size and scope as a result of federal officers’ actions outside the federal courthouse that heightened tensions on the street.

US sanctions Chinese companies for dealing with Iranian shipping line

Boeing 737 Max Can Return To Service Before Year's End In Europe: Regulator

Amazing Silver Chart Shows How Undervalued It Is

The Great Conservative Migration And What It Means For The Future