Sixteen years ago, St Stephen’s church in Bradford was on the verge of closure. Its congregation had dwindled to half a dozen, and the building – a “big old barn of a place”, in a predominantly Muslim area – was in poor repair. “People thought it had had its day,” said the Rev Jimmy Hinton.

Now, St Stephen’s is a vital hub, providing support and activities in an area of acute deprivation. The nave has been cleared of its pews, and heating has been installed. On a typical day, you might find an exercise class, a support group for asylum seekers and refugees, community meals being cooked and served, singing and stories for infants, mosaic-making, and people hunting for jobs or claiming benefits online.

The old organ chamber is now a children’s clothes bank. Outside, a gardening club looks after the church grounds which accommodate a play area. A formerly derelict church hall hosts family parties and celebrations that can’t be squeezed into the back-to-back terraced homes in the neighbourhood.

“It’s a story of resurrection,” said Hinton, who has been vicar at St Stephen’s since 2005. “New life has come from a place that was considered finished. The church is used every day of the week for planned activities but also for people who just want to be somewhere friendly and warm.”

St Stephen’s is one of thousands of churches of all denominations providing and supporting social action projects across the country. Last week, the Church of England said its 16,000 churches were running or supporting 35,000 projects before the Covid-19 pandemic, including 8,000 food banks, 4,000 parent-toddler groups, 5,000 lunch clubs or coffee mornings, 2,700 community cafes, 2,400 night shelters and 2,300 breakfast or holiday clubs for children. 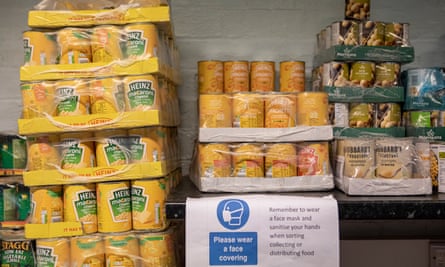 The church has played a vital role in setting up and running food banks. Photograph: Gary Calton/The Observer

Now, for the first time, the financial value of the services and support that church buildings provide, and the health and wellbeing they create, has been calculated at £12.4bn a year. The figure comes from an independent study published today, commissioned by the National Churches Trust and carried out by State of Life, an organisation which measures social value.

Its report, House of Good, says: “There are currently more food banks than McDonald’s in the UK – and churches have played a vital role in setting up and running the majority of them.” Other church-based projects include drug and alcohol support groups, mental health and counselling services, youth clubs, after-school care and credit unions.

The market value of church-based projects is £2.4bn a year, it says. This includes running, staffing and hiring out of church buildings, the amount it would cost for authorities to replicate social and community services currently provided by churches, and the replacement cost of volunteers’ time at the national living wage.

In addition, the non-market value is put at at least £10bn a year. The report says: “Non-market (also called social and welfare) value describes an activity or outcome that is difficult to measure in pounds and pence. For example, things like health, happiness, confidence or trust are incredibly important but difficult to put a price on – let alone buy.”

About £7bn of this amount is generated by food banks. Churches have “played a vital role in setting up and running the vast majority of Trussell Trust food banks and 50% of independent ones in the UK”, the report says. The study followed an innovative approach consistent with the 2018 Treasury’s Green Book, the government’s guidance on how to assess economic and social value.

“At every turn we’ve taken the most conservative estimates to reach these figures,” said Will Watt of State of Life. “We’re saying that these activities and services that are so often taken for granted, or considered ‘free’, have an enormous economic value.”

The National Churches Trust said the report reinforced the case for government funding to help maintain and modernise church buildings. C of E churches are the responsibility of local parishes, who have to raise funds and apply for grants from bodies such as the National Churches Trust for the upkeep of buildings, the majority of which are listed.

Churches social action projects were at risk “if these buildings do not get the financial support they need,” said Claire Walker, the trust’s chief executive. “Each year, we receive thousands of requests for help from churches desperately in need of repairing the roof, or installing kitchen facilities and toilets, but we are only able to fund a quarter of these.”

During lockdown, 89% of churches had continued to provide some support for local communities, and a third had been able to fully continue existing support.

The report says: “As we emerge from Covid-19, we need to identify ‘key places’, just as we have already identified key workers – those places that will start to rebuild and look after the vulnerable and hardest hit in our society. One of those key places will be, and always has been, the local church building and its gathered community.

Bradford is now in tier 2 of the lockdown scale, and Hinton knows further Covid restrictions may be coming. St Stephen’s would continue to “look outwards, look beyond ourselves, to the needs of a needy community,” he said.

“When I hear people of another faith describing this place as ‘our church’, that’s incredibly precious. The key is keeping going. We will find ways of supporting people whatever is coming down the track.”

Coronavirus live news: global infections near 40m as US Covid cases rise in all but two states

What is racial stamina? And do you have any?

Police officer poisoned by novichok in Salisbury to quit

'Scarred for life': Sage experts warn of impact of Covid policies on the young

We were made for these times

Pray for the President and First Lady

‘Biden gets Ireland’: why Joe in the Oval Office would thrill Joe in Mayo

How To Increase Your Concentration Time