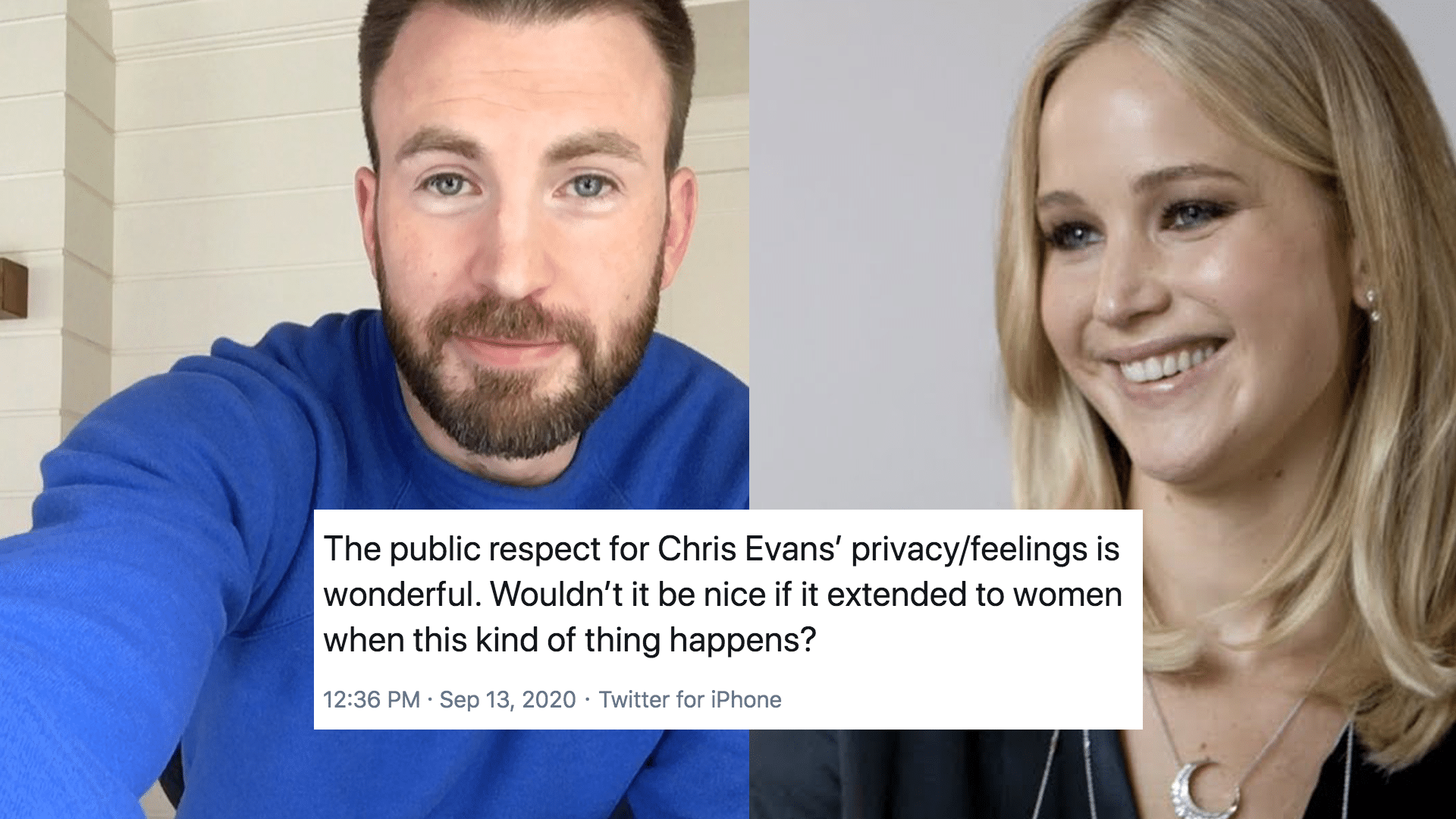 Marvel actor Chris Evans gave his fans an unexpected look into his personal life during an Instagram live session on Saturday night when he unintentionally shared a nude picture of himself.

Fans of Evans were quick to defend him and they demanded we respect the actor and his privacy. These reactions have sparked a conversation about sexism on the internet, specifically questioning why female celebrities face much different treatment upon accidental releases of their nudes.

In a since deleted post, the scandalous picture of Evans left the internet in a pandemonium. People all over the world were in shock and awe as the picture was quickly circulated on Twitter. (If you find yourself curious and want to do some digging, make sure you’re not using a work computer when searching). But, rather than make fun of Evans or hyper sexualize the image, fans are calling for censorship and to respect the privacy of Evans.

Thousands of people are trying to acknowledge that Chris Evans has brought a lot of good into the world. Even outside his hit films, he is known for charity work and sincere generosity. Therefore, fans argue we shouldn’t judge him on this one mistake. In an attempt to change the narrative, the internet exploded with fans praising the actor for his other assets.

Wanna know why Chris Evans is trending? Cuz he’s the sweetest, kindest person and is a brilliant actor. pic.twitter.com/5q5Xwbvsxl

Guys remember. He is a genuinely kind and sweet guy with anxiety we should respect his privacy, he deserves it🥺🥺

Clearly, privacy and sensitivity are important values to users of the internet, but it seems a bit ironic. (The internet, of all places, is saying we should work together to keep things more private.) While others agree we should treat Chris Evans with kindness, they can’t help but wonder why women don’t get the same treatment when they have nude photos released on the web.

Chris Evans accidentally leaked a nude photo. For the most part, social media has rallied around him. Nobody called him a slut. Nobody insisted he was an attention whore. Nobody thinks his career is ruined.

We need to give women this same love & respect. 💯💯💯#ChrisEvans

I loved the way how people are supporting #ChrisEvans with so much positivity and love to keep his mental health in sound state. I really wish and hope that if a girl’s nudes are leaked unintentionally, we people will help her in the same way instead of just slut shaming her!🤞❤️ pic.twitter.com/Z8h6inenun

It’s clear that regardless of his beloved acting and generosity, Chris Evans is getting much different treatment on the web because he is a man.This accidentally leaked explicit image is creating meaningful conversations on the patriarchy, sexism and the treatment of women in Hollywood. Actress Kat Dennings took to Twitter to comment the following:

The public respect for Chris Evans’ privacy/feelings is wonderful. Wouldn’t it be nice if it extended to women when this kind of thing happens?

Unfortunately, throughout the history of the internet, women have been far less lucky and privileged to their privacy when incidents like this occur.

For example, back in 2014, Jennifer Lawrence was a victim of the ‘Celebgate’ hacking ring and had her explicit photos published online anonymously.  News sites and social media users were quick to blame Lawrence, saying female celebrities should always be prepared for a hacking and need to avoid taking sexual photos if they don’t want them out for public consumption someday.

@EmWatson @megturney Simply ask yourself, why in the hell you’re putting your nude pics on a device that is 24/7 connected to internet

Lawrence spoke with Vanity Fair about the incident and said that, “just because I’m a public figure…does not mean I asked for this. It does not mean that it comes with the territory. It’s my body, and it should be my choice, and the fact that it is not my choice is absolutely disgusting.”

Talk show host, Wendy Williams, responded to Lawrence’s statement by saying, “Um, it’s not your choice, it’s in the Cloud and I’ve looked several times. So I guess I’m disgusting for looking?”

She proceeded to tell her audience that essentially Lawrence is to blame for the photos leaking because she took them in the first place.

As you can see, it’s not just fans who have a vastly different perspective, but also the media outlets. They report on these incidents differently based on if it is a man or a woman. We have yet to find an article or publication that is condemning Evans or saying he shouldn’t have taken a photo like he did in the first place.

It is fair to note too that more often than not, women are hacked and the photos are stolen from them, whereas in the case of Chris Evans, he essentially hacked himself.

It’s safe to say privacy was the last thing Lawrence got from the public or the media. We have to wonder what needs to happen in order for women to get the same respect and treatment as their male counterparts. It’s great that six years later, Chris Evans is treated with more respect, but we hope this respect will also be given to the next female actress with leaked photos.

Evans has not made a public statement on the photos as of Monday morning. While he should not be condemned for his accidental nude leak, the same should go for his female peers, without question. In the end, this accident has resulted in meaningful discussion which will hopefully bring serious reform when it comes to the privacy and respect of others on the internet.

What do y’all think? Would every celebrity be met with this much respect and love? Is the respect only given to the one and only Captain America? Is he really getting special treatment because he is a man? Or, will we ever respect the privacy of female celebrities on the internet? We want to know your thoughts!

Youtube’s Most Popular Content Creators Cash In On Relief Funds

Disney deserves the massive loss from Mulan remake it’s getting

‘Cuties’ is so blatantly perverse, even 4chan censored ANY screenshots from the movie