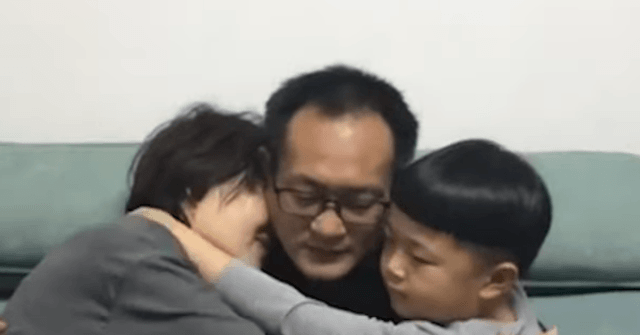 Human rights lawyer Wang Quanzhang was finally allowed to see his family in Beijing on Monday, three weeks after he was nominally released from a 4.5-year prison sentence.

Wang was thrown into a dubious “coronavirus quarantine” after his jail term ended, then forbidden to travel to Beijing. He told reporters on Monday he might not be allowed to stay with his family for long, even though his wife is gravely ill.

Wang was arrested without due process during a vicious persecution of human rights lawyers and democracy activists known as the 709 Crackdown, because it began on July 9, 2015. At least 300 people were detained and interrogated during the crackdown, mostly using the CCP’s reliable excuse for persecuting dissidents, “picking quarrels and provoking trouble.”

Lawyers brave enough to attempt representing victims of the 709 Crackdown were harassed and intimidated, as were the families of the victims. Sham trials and illegal detentions without charge were hidden from outside observers by claiming sensitive “state secrets” were revealed during testimony.

Wang languished in prison for over three years, without access to legal representation or contact with his family, before the Chinese Communist Party (CCP) got around to charging him with anything. He was convicted of “subverting state power” in January 2019, probably because he offered legal representation to members of the Falun Gong spiritual movement, and “sentenced to four years and six months in prison, and deprived of political rights for five years,” according to the court statement. He was finally allowed to see his family in prison for the first time in June 2019, four years after the CCP made him disappear.

Amnesty International declared Wang a “prisoner of conscience” who was “at risk of torture and other ill-treatment,” unsuccessfully demanding his immediate release. Human Rights Watch noted that Wang’s detention and the constant official harassment of his family violated both Chinese and international law.

Persistent reports circulated that Wang was tortured with electric shocks during his detention. He told reporters on Monday he is not yet comfortable with discussing how he is treated, which is unsurprising given that he remains under constant surveillance and could be whisked away from his wife and son again at any moment.

After Wang was released from prison, he was immediately “quarantined” for possible coronavirus exposure, effectively putting him under house arrest in his hometown of Jinan for weeks while his family waited in Beijing. When the “quarantine” was finally lifted, he was told he was not allowed to travel to Beijing. His movements remained restricted to short shopping trips around Jinan, and friends said they feared they would be “quarantined” as well if they went to visit him.

The U.S. State Department denounced the continuing persecution of Wang Quanzhang last week and demanded he be allowed to rejoin his family in Beijing. When Wang learned his wife Li Wenzu was suffering from severe abdominal pain, he defied the police and tried to take a taxi to Beijing. He was seized by masked plainclothes police officers when his taxi reached the highway and detained for a while, but eventually allowed to complete his journey to Beijing.

“I don’t know how many times I’ve dreamed of us being reunited during the past five years,” his wife Li Wenzu said as the couple hugged. “Now it feels as if I’m dreaming.”

“Dad, we’re having dumplings this evening,” the couple’s young son Wang Guangwei told his father in a video made available by the family via social media.

“Great, can I have a hug now?” Wang replied, before sitting with his arms around his wife and child on the family sofa.

In a videotaped recording of the family union, Wang said he felt as though he has awakened from a trance and said it took him five years to realize his dream of once more holding his wife and child. “We’ll never be apart again, will we?” Li asked him.

Li has been hospitalized for her abdominal pain and may soon require surgery for appendicitis, according to a friend of the family, who added she has “been under constant psychological pressure for the past five years.” Li herself said she has received treatment, but is still in some pain.

Li captured international attention in April 2018 by shaving her head and marching over 60 miles from Beijing to Tianjin, the city where her husband was incarcerated, to raise awareness of his plight and demand answers from the authorities. At the time, she was not certain if Wang was still alive, fearing he might have been tortured to death in a bid to extract a forced confession.

“We are walking to seek an answer from the Chinese legal system. Is China really a country with rule of law?” she asked as she began her march.

Before he defied the CCP’s orders and returned to Beijing, Wang told the South China Morning Post (SCMP) that he was forced to set aside his emotional connection to his family to survive in prison.

“I was suddenly isolated from the whole world and I was totally consumed by the pain that I was separated from my wife and son. As it went on, I had no choice but to force myself to give up my emotional reliance on them and become indifferent,” he explained.

“Honestly, I would not be able to stand my ground for so long if I had not become indifferent. So this was why I was very aloof to my family when they visited me at the prison,” he added.

Wang said his goal was to “gradually find my way back to the psychological and emotional state of a normal person.”

The Hong Kong Free Press noticed a crowd of “around ten” police and other government officials swarming around Wang and Li’s apartment as “minders.” Three of them tried to follow Wang into the apartment but were rebuffed by Li and her friend Wang Qialoing, wife of another human rights lawyer who was a political prisoner in China, Li Heping.

Fauci: 'Hopefully' We Can Test Everyone Who Needs It by End of May, Start of June

President Trump on Coronavirus: We Are Not Happy with China, Could Have Been Stopped at the Source