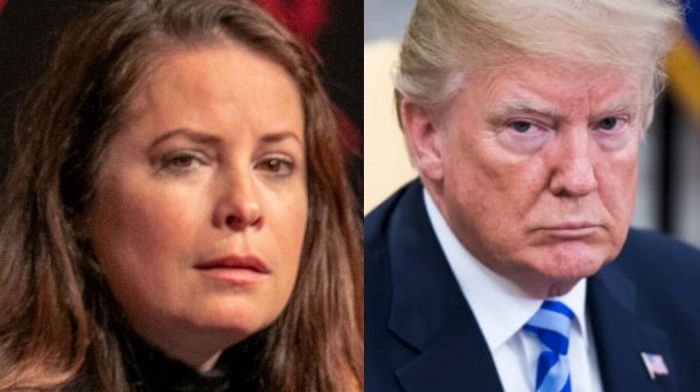 Actress Holly Marie Combs, who starred with Alyssa Milano and Rose McGowan on the TNT television show “Charmed,” spoke out this week to blame President Donald Trump for her grandfather’s death from complications due to coronavirus.

“My grandfather died today. He voted for you,” Combs tweeted on Monday in response to a tweet from Trump. “He believed you when you said this virus was no worse than the flu. He believed every lie you muttered and sputtered. He died today from Covid-19 one day after his 66th wedding anniversary. You’re a disgrace to the human race.”

My grandfather died today. He voted for you. He believed you when you said this virus was no worse than the flu. He believed every lie you muttered and sputtered. He died today from Covid-19 one day after his 66th wedding anniversary. You’re a disgrace to the human race.

Her tweet came in response to a tweet in which President Trump rightfully defended himself from the false claim that he described the coronavirus pandemic as a hoax. This piece of fake news continues to be pushed by leftists everywhere despite the fact that Trump instead only said that Democrats’ attempts to politicize COVID-19 was a hoax.

“I never said the pandemic was a Hoax! Who would say such a thing?” Trump had tweeted. “I said that the Do Nothing Democrats, together with their Mainstream Media partners, are the Hoax. They have been called out & embarrassed on this, even admitting they were wrong, but continue to spread the lie!”

Combs has not offered any other details about her grandfather’s death, and her representatives refused to comment when asked to by Fox News. The actress, however, has since doubled down on her hatred for Trump and those who support him.

“Zero tolerance for Trumpers. Zero. Take it to someone else’s timeline. Not today Satan,” she later tweeted.

Zero tolerance for Trumpers. Zero. Take it to someone else’s timeline. Not today Satan.

While we’re obviously sorry for Combs’ loss, it’s ridiculous to blame President Trump for any coronavirus deaths when this pandemic has killed hundreds of thousands of people all over the world. COVID-19 originated in China, a nation that endangered the rest of the world by covering it up as long as possible, making it impossible for the rest of us to do anything to protect ourselves. If Combs really wants someone to blame for her grandfather’s death, she should really take a harder look at China, not President Trump.

This piece was written by PopZette Staff on April 29, 2020. It originally appeared in LifeZette and is used by permission.

Democrat who thanked President Trump refuses to be silenced by Governor Whitmer: ‘I will go up against her any day’

Trump Threatens to Block Aid for U.S. Postal Service If It Does Not Raise Prices for Amazon

Trump supporters sail hundreds of boats near his Florida home