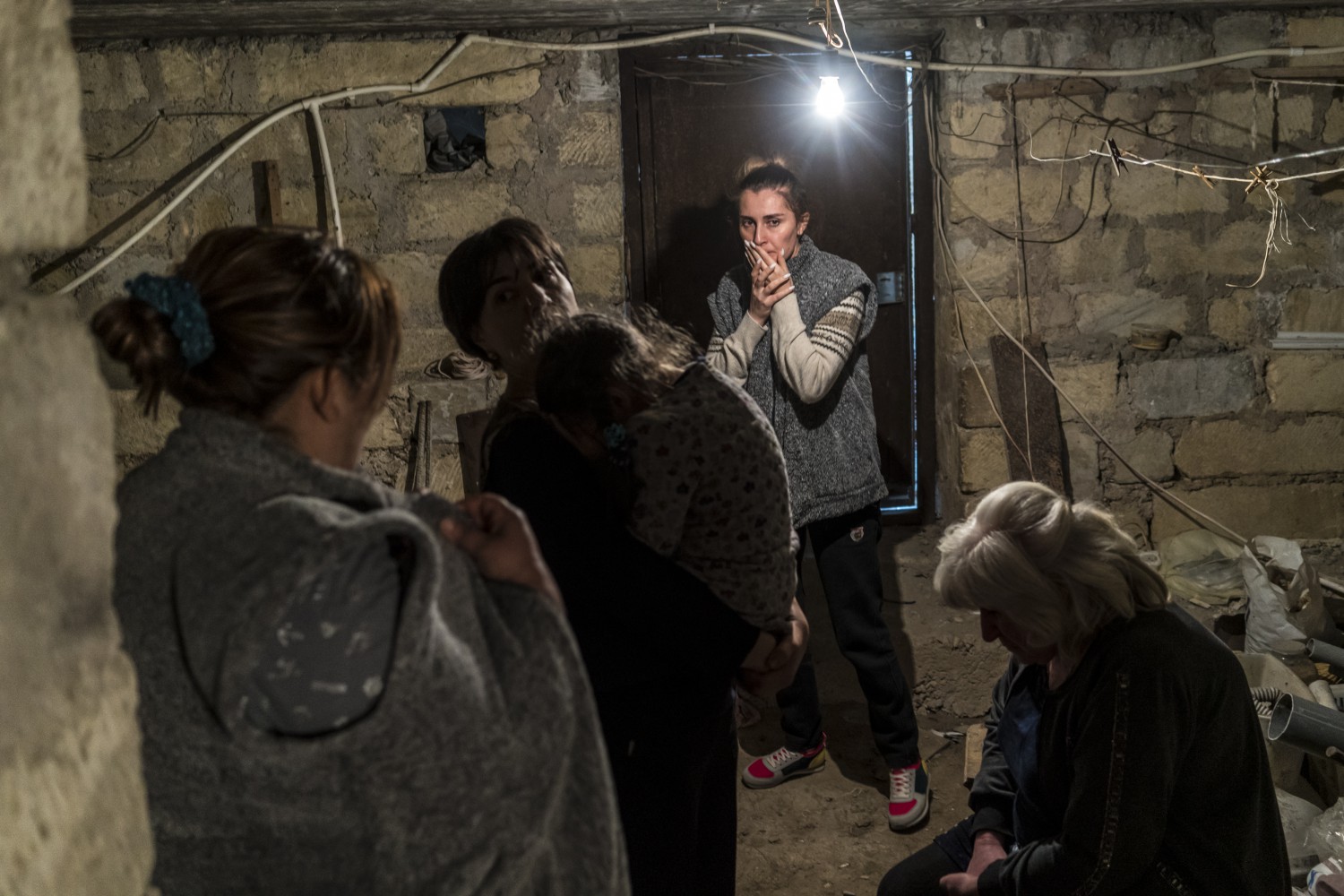 It is impossible to fully understand what is going on in the Nagorno-Karabakh without taking into the account the wider context, which is not that of a mere Azeri-Armenian dispute but is that of the new Russo-Turkish wars and, to an even greater extent, that of the chessgame for control over the Heartland.

The World-Great Powers In The Nagorno-Karabakh

This conflict is not the mere result of decades-old never-solved misunderstandings between two countries and there is a very simple and easy way to prove it: the world-great powers are deeply involved in it.

Russia, Iran and their satellites are backing Armenia, whereas the West, Turkey and Israel are supporting Azerbaijan. Each player has its own reason for explaining his choice and sometimes there is no dialogue among them, the only thing in common is their positioning in the conflict – this is the case of Turkey and Israel, with the former backing Baku to expand its influence in the region and in accordance with its Pan-Turkic agenda and the latter driven by the goal to counter the Iranian influence.

The European Union is siding Baku for reasons other than Pan-Turkism, Russia or Iran: energy security. In the recent years, the Azeri gas has proved a valid alternative to the Russian gas and both Bruxelles and Ankara see in Baku a strategic partner with which to decrease their over-reliance on Gazprom.

Then, there is the United States which turned into the Western bloc’s core state in the aftermath of the World War Two and, coherently to its new role, it inherited from the United Kingdom the burden of keeping Eurasia fragmented and pervaded by a controlled and productive chaos.

The South Caucasus Is a Keystone

In the 1980s it would have proved impossible and unimaginable for the West to enter South Caucasus and give rise to a game-changing anti-Russian movement, whose strength is such that it has been re-drawing Georgia’s and Azerbaijan’s national identities. In fact, the former is slowly heading towards the EU and the NATO whereas the latter is more and more part of the Turkic world. It comes as no surprise that, at the outbreak of the new season of fire in the Nagorno-Karabakh, Turkey’s Foreign Minister Mevlut Cavusoglu claimed that Ankara is ready to support Baku both diplomatically and militarly because they are “two countries, one nation“.

Why the West is so interested in the epoque-making dynamics in the post-Soviet Caucasus is easy to understand: the ultimate goal of Washington in the contemporary era is the same that drove London’s moves between the late 18th century and the early 20th century: to prevent any Eurasian power from taking full control over the so-called Heartland.

The hegemony over South Caucasus, a region from which Russia has been almost completely ousted over the years due to the once-in-a-lifetime opportunity offered by the USSR collapse, is a mandatory step in this context due to its pivotal role in linking the Black Sea and the Caspian Sea, namely to connect Europe to Central Asia: that’s why the US sponsored a color revolution in Georgia, then in Armenia and now is backing Azerbaijan.

Zbigniew Brzezinski had the historical merit of understanding the evergreen truth exposed in the pages of Sir Halford Mackinder’s The Geographical Pivot of History. Mackinder, which is considered the founding father of modern geopolitics, argued that if the United Kingdom wanted to maintain its global hegemony, it had to shift the focus from maritime supremacy to the terrestrial dimension, more in detail to Eurasia. Three were the powers that scared Mackinder the most: Germany, Russia, and China. Accordingly, he set the guidelines for a grand strategy aimed at avoiding a Russo-German axis and at keeping the Heartland out of control of any great Eurasian power.

The USSR hegemonized the Heartland for almost a century but it didn’t get to achieve a world-extended hegemony: the West managed to keep Eurasia fragmented and impossible to control for any Asian power at first with the containment doctrine and then by playing Moscow and Beijing one against the other. In any case it was only matter of containing the Kremlin’s expansion, because the Heartland couldn’t be touched in any way.

But the end of the Cold War paved the way for a historical and dramatic ground-breaking change: the Heartland-ruling Soviet Union imploded in fifteen states. Shortly after the event, Brzezinski, former counselor to Lyndon Johnson and Jimmy Carter’s National Security Advisor, elaborated a very detailed grand strategy for Eurasia aimed at exploiting to the fullest the disappearance of the Soviet empire.

His ideas took the form of a book, The Grand Chessboard, dated 1997, whose suggestions and predictions are all coming true: from the NATO’s and the EU’s eastward expansion to the instrumental use of Poland to form an anti-Russian cordone sanitaire incorporating Eastern European post-Communist and post-Soviet states, from Euromaidan to the promotion of an Islamic and pan-Turkic revival in the post-Soviet Central Asia.

If the key-word throughout the Cold War had been “containment”, Brzezinski changed it in “encirclement”, which implies also “resizing”. However, not everything went as planned because the decision to turn “Russia from an Eurasian empire to an Asian empire”, by promoting a bloody color revolution in Ukraine, prompted the Kremlin to build an anti-Western strategic partnership with China, and in minor part with Iran.

Brzezinski, as previously said, elaborated his vision by re-reading and updating Mackinder’s thought. It was precisely Mackinder to suggest to removal of South Caucasus from Russia’s orbit and he did so in the aftermath of the Communist revolution hopefully to convince the United Kingdom to fund anti-Bolshevik separatist movements in the Baltic states, Belarus, Ukraine, Georgia, Azerbaijan, Armenia and Dagestan – the last one included Chechnya and Ingushetia at the time of his writings.

From the Baltics to Chechnya it is impossible not to note how Mackinder’s post-World War One ambitions have been resumed by the West in the post-Cold War, perfectly condensed in Brzezinski’s masterplan and later turned into reality. Now, 23 years later the start of the chessgame, the Stalin-built buffer-zone system has been almost completely incorporated in the EU-NATO system and, as a natural consequence of this, the West is increasing the pressure over the remaining Russian-influenced areas in Europe and South Caucasus: Serbia, Moldova, Belarus and Armenia.

Both Mackinder and Brzezinski were very interested in the dynamics taking place in the South Caucasus because, as previously written, it represents a linking point the Black Sea and the Caspian Sea, that is between Europe and Asia. According to Mackinder, “the Heartland for the purposes of strategic thinking, includes the Baltic Sea, the navigable Middle and Lower Danube, the Black Sea, Asia Minor, Armenia, Persia, Tibet and Mongolia”.

Brzezinski’s vision differs from that of his predecessor only for one fact: it has been deepened and perfected by the addition of new elements. In the pages of The Grand Chessboard can be found the reason for the Western involvement in Azeri-Armenian dispute on Baku’s side: “Azerbaijan is […] geopolitically critical. […] It can serve as a corridor for Western access to the energy-rich Caspian Sea basin and Central Asia”.

Actually, modern-day Azerbaijan has become what Brzezinski predicted: a vital energy provider for the West. But Baku, in order to be truly useful and fully exploitable to the ends of the chessgame, had to also fall into Ankara’s sphere of influence because “an independent, Turkic-speaking Azerbaijan, with pipelines running from it to the ethnically related and politically supportive Turkey, would prevent Russia from exercising a monopoly on access to the region and would thus also deprive Russia of decisive political leverage over the policies of the new Central Asian states”.

The US is close to make checkmate not because of Brzezinski’s infallibility but due to the Kremlin’s underestimation of the West’s purposes in the post-Soviet space. It should have been very clear in 1999 and 2004, with the NATO enlargement to Baltic states and Warsaw pact former members, that a new cold war was secretly underway.

This myopia worked in favour of the West, which got to expand silently its influence in the post-Soviet space over the years: from Eastern Europe to South Caucasus, and even to Central Asia, where the West is skillfully making use of Turkey as a fifth column to weaken Russia’s power position. Now, only a bunch of countries are left in the Kremlin’s backyard and all of them are experiencing an extraordinary pressure.

Another severe mistake was to increase the reliance on the West, in particular the EU, from trade and energy exports to tech acquisition. Such dependency proved harmful in the aftermath of the Ukraine-related sanctions regime and has been obliging Russia to elaborate a China-based contingency plan that, again, may prove successful or extremely detrimental. Such situation was forecasted by Brzezinski, who strongly believed that an eventual Moscow-Beijing axis would be Chinese-led and would accelerate Russia’s run to demotion from a world-leading power to an ever-decliningly regional power belonging to China’s sphere of influence.

23 years later the publication of The Grand Chessboard, the Asia’s New Great Game seem headed near to the end and it’s the US who is going to make checkmate. Russia has only one opportunity to win the game: to let itself be guided by Brzezinski, that is to read carefully the content of his prophecy-empowered book and to study in-depth his thought, because the US is basing its Russia-focused foreign agenda on them.

The first step is to convert the partnership with China into an alliance, but in such a way not to play a junior role, the second is to use Iran to counter Turkey’s ever-growing influence in South Caucasus, Central Asia and even within Russia itself. Brzezinski’s nightmare was the birth of an anti-hegemonic coalition formed by this powerful trio: the defense of the Heartland, and of their own very existence, depends on them forming a world-overturning alliance.

Sen. Bernie Sanders Worked With Biden To Potentially Create The “Most Progressive Agenda Since FD…

Amy Coney Barrett Is A Defender Of Government By The People, Not By Bureaucrats