The Prime Minister has warned the EU talks on a post-Brexit free trade agreement are over unless Brussels shows a “fundamental change of approach”. In a strongly-worded statement broadcast on Friday, he told the UK to get ready for no-deal as long-running but often bitter negotiations between the two sides completely collapsed during the European Council summit in the Belgian capital. Mr Johnson accused the EU of making “unacceptable” demands and insisted a “fundamental change of approach” was needed by Brussels if there was to be any chance of an agreement.

He said: “From the outset, we were totally clear that we wanted nothing more complicated than a Canada-style relationship, based on friendship and free trade.

“To judge by the latest EU summit in Brussels, that won’t work for our EU partners.

“They want the continued ability to control our legislative freedom, our fisheries, in a way that is obviously unacceptable to an independent country.

“Given that they have refused to negotiate seriously for much of the last few months, and given that this summit appears explicitly to rule out a Canada-style deal, I have concluded that we should get ready for January 1 with arrangements that are more like Australia’s based on simple principles of global free trade.” 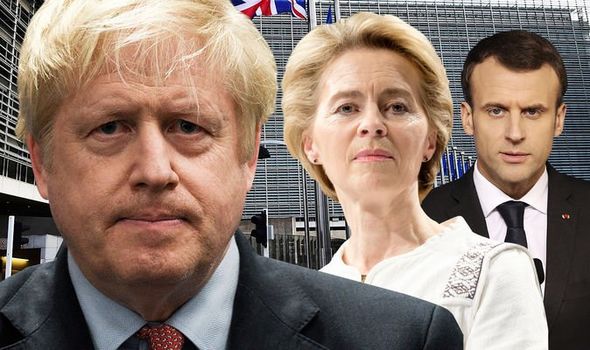 Brexit news: Boris Johnson has been warned the EU won’t cave to demands from the UK (Image: GETTY)

Now Express.co.uk readers have launched savage attack against the EU, warning the Prime Minister the bloc will remain stubborn in its attempts to fight back against his ultimatum.

The latest poll, which ran from 1pm until 9pm on Saturday October 17, asked: “After Boris’s ultimatum, will EU finally cave and accept UK demands?”

However, nearly two thirds (62 percent or 5,077 readers) believe the EU will stand firm and not bow to the latest demands from the Prime Minister.

Just under a third (32 percent or 2,584 readers) believe Mr Johnson has now gained the upper hand with his ultimatum, while the remaining six percent (451 readers) are undecided.

Brexit news: Express.co.uk readers do not believe the EU will cave and accept the UK’s demands (Image: EXPRESS)

Express.co.uk readers have again backed the UK to walk away from the negotiating table with the EU and leave the bloc on December 31 with no trade deal in place.

One person wrote: “The EU is not going to give Boris a deal that allows the UK to be competitive with the bloc – not when we sit on their doorstep across the channel.

“It’s just not going to happen, and from their point of view you can see why it never will with a deal done.

“The only way that would happen is the UK walking away with a No Deal.”

A second person wrote: “I hope they don’t cave in. No deal is the best deal.”

Several other Express.co.uk readers launched scathing attacks against the EU, with some accusing the bloc of being “devious” and showing “arrogance”.

One person commented: “The EU will be scheming and devious and will disguise under treaty and legislation. Do not trust them Boris.”

Another said: “The underlying arrogance and belief of their superiority with a total lack of integrity, coupled with a general disregard for their own rules, suggests not.”

Mr Johnson had maintained that if a trade deal had not been agreed by last week’s European Council summit, which started on Thursday, he would walk away from the negotiating table.

But this was quickly shot down by Number 10, who said there was “no basis for negotiations” in the capital.

And the UK’s chief negotiator Lord Frost told his counterpart Mr Barnier not to come.

A Number 10 spokesman said: “Lord Frost has spoken to Michel Barnier to update the EU on the Prime Minister’s statement.

“Lord Frost said that, as the Prime Minister had made clear, the European Council’s conclusions yesterday had left us without a basis to continue the trade talks without a fundamental change in the EU’s approach to these negotiations.

“There was accordingly no basis for negotiations in London as of Monday.

“He and Michel Barnier agreed to talk again early next week.”

The Prime Minister’s official spokesman added: “There is only any point in Michel Barnier coming to London next week if he is prepared to discuss all of the issues on the basis of legal texts in an accelerated way, without the UK being required to make all of the moves.

“Or he is willing to discuss the practicalities of areas such as travel and haulage, which the Prime Minister mentioned in his statement.

“If not, there is no point in coming.”

Barrett confirmation vote expected by end of the month

An illustrator with 723,000 Instagram followers used social media to make art his full-time job. Here's his formula for building a fanbase and landing collaborations with stars like Post Malone.

RT @svdate: NEW — Ever since it came out that he had ignored Russian bounties being paid for murdered American soldiers, Trump has much pr…

Too Casual with COVID-19: The High Price of Freedom in Sweden