Tony Blair and Sir John Major have urged MPs to reject the “shameful” attempt to override parts of the Brexit withdrawal agreement. The two former Prime Ministers have accused the Government of “embarrassing” the UK by seeking the power to change the details of the treaty agreed with the EU last year. MPs will begin debating the contentious Internal Market Bill today.

A senior minister said the ex-Prime Ministers weren’t “close” to the process and the UK was in an unprecedented situation.

Writing in the Sunday Times, Sir John joined Mr Blair in saying the Government’s actions were “irresponsible, wrong in principle and dangerous in practice”.

They added: “It raises questions that go far beyond the impact on Ireland, the peace process and negotiations for a trade deal – crucial though they are. It questions the very integrity of our nation.”

It is not the first time the two former leaders put their party allegiances aside to condemn Brexit and tried to stop Britain’s withdrawal from the bloc. 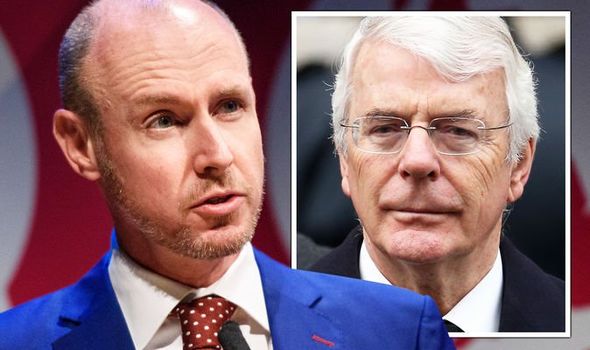 Sir John’s battles to thwart Brexit can be seen as ironic, though, as according to Conservative MEP Daniel Hannan, Sir John could have easily prevented it from happening.

As soon as he became Prime Minister in 1991, Sir John felt the relationship between Britain and the EEC – the precursor to the EU – had to change.

During a speech in Brussels, the Bristol-born politician expressed his desire to place “Britain at the heart of Europe” with the Maastricht Treaty.

The Treaty is the international agreement that saw what was then the EEC evolve into the EU with initially only 12 member states.

It laid down the groundwork for economic and monetary union with a single currency at its heart and new rules on inflation, debt and interest rate regulations.

JUST IN: End of euro: Why ‘Nordic-style measures are key to Europe’s survival’

The Treaty, though, which greatly increased the powers of the European Commission, was widely unpopular according to opinion polls and it is what arguably split the Conservative Party on the European issue for decades.

Sir John decided to ignore this and signed it in 1992.

When asked why the former Prime Minister did so when there was so much growing opposition, Mr Hannan told Express.co.uk: “That is a great question because he didn’t need to.

“His argument was that it was the minimum necessary to keep our foot in the door.

“But then when the Danish people voted against it, that should have been him off the hook.

“If he had taken that opportunity to repudiate the Maastricht Treaty or if he had granted a referendum on it, Britain I suspect would have ended up with some kind of associate status.

“Other members would have been able to go ahead with all the common and so on.

“We would have stayed out of it.

“And we would now be associate members to this day and Brexit would not have happened.

“But, as so often, the europhiles overreached.”

Bone-Chilling WTF Charts of the Collapse in US Demand for Gasoline, Jet Fuel, and Diesel

How should Republicans address free speech concerns with big tech?

Portland protesters will no longer be prosecuted for non-violent charges

Pentagon chief seeks to reassure Nato over US troop plans

Biden: ‘The Generation Between 7 and 17 Is More at Risk Than Any Generation in History of U.S. in Terms of Anxiety’

The ‘deep state’ in the White House is real: Mick Mulvaney