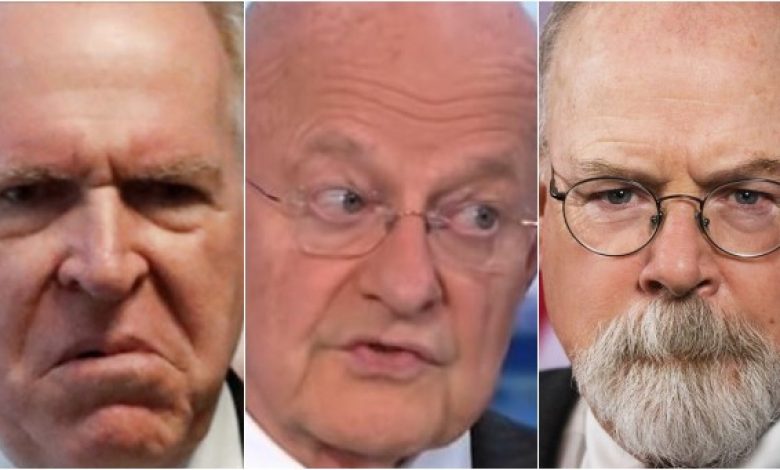 As you know, Attorney General Willian Barr appointed U.S. Attorney from Connecticut John “Bull” Durham to take on the probe to investigate possible misconduct by the intelligence community at the origins of the Russia investigation.

Durham, who is known as a “hard-charging, bulldog” prosecutor, was asked to help Barr “ensure that intelligence collection activities by the U.S. government related to the Trump 2016 presidential campaign were lawful and appropriate.” Durham also is probing whether Democrats were the ones who had improperly colluded with foreign actors, FOX News reports.

Durham intends to interview a number of current and former intelligence officials involved in examining Russia’s effort to interfere in the 2016 presidential election, including former CIA Director John Brennan and former director of national intelligence James Clapper, according to a report at NBC News.

Durham has also requested to talk to CIA analysts involved in the intelligence assessment of Russia’s activities, prompting some of them to hire lawyers, according to three former CIA officials familiar with the matter. And there is tension between the CIA and the Justice Department over what classified documents Durham can examine, two people familiar with the matter said.

Durham was reviewing the days leading up to the 2016 election and through the inauguration. But based on his initial findings, he has expanded the probe to include a post-election timeline through spring 2017 — up to when Robert Mueller was appointed as special counsel.

As part of the probe, Barr and Durham traveled to Italy to speak to law enforcement officials about their investigation, and also had conversations with officials in the U.K. and Australia about the investigation, according to multiple sources familiar with the meetings.

The attorney “is gathering information from numerous sources, including a number of foreign countries. At Attorney General Barr’s request, the president has contacted other countries to ask them to introduce the attorney general and Mr. Durham to appropriate officials,” Justice Department spokeswoman Kerri Kupec said last month.

Durham’s probe is similar to one being conducted by the Justice Department’s Office of the Inspector General, The DCNF reports.

TIL that Nigerian cook Harrison Okene survived for two days underwater when his boat capsized in 2013. He was trapped in the boat’s bathroom and breathing from an air bubble. He could smell and hear fish eating the dead bodies of his crew members. He was found alive by divers searching for bodies.

Poll: 34% of US voters think a civil war is ‘likely’ within 5 years

Hirshman: The Problem With American Democracy Is White Men With Guns

The moral triangle: Germans, Israelis and Palestinians in Berlin

Southern European Tourism (21% Of GDP) Is On Its Knees… Will It Ever Get Back Up Again?

The Grim History of Counting the Dead During Plagues

Mom of Floyd’s daughter: I want justice for him

The Legend of KEN and KAREN is Born

The Ultimate Human Recharging Station – How To Reboot The Human Battery, Get To Sleep Faster, Increase Energy & Restore Your Cell’s Proper Electrical Voltage With A Biocharger.