Boris Johnson said some in the European Union are trying to argue that every good is liable to tariffs. Speaking in the House of Commons, Mr Johnson said: “That would mean tariffs that could get as high as 90 percent as value on Scottish beef going to Northern Ireland. Tariffs potentially over 61 percent on Welsh lamb and potentially over 100 percent on clotted cream.

“This is unreasonable and plainly against the spirit of that protocol.

“They are threatening to carve tariff borders, tariff borders across our own country and to divide our own land and to change the basic facts about the economic geography of the United Kingdom and egregiously to ride roughshod over their own commitment under Article 4 of the protocol whereby, and I quote, ‘Northern Ireland is part of the customs territory of the United Kingdom’.

“We cannot have a situation where the very boundaries of our country could be dictated by a foreign power or international organisation.

“No British prime minister, no government, no parliament could ever accept such an imposition.” 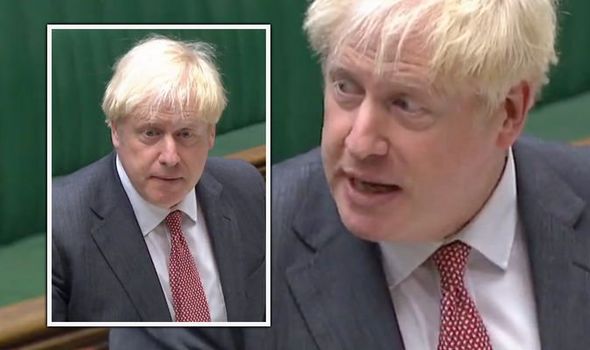 Mr Johnson added: “Let us seize the opportunity presented by this Bill and send a message of unity and resolve. Let’s say together to our European friends that we want a great future relationship and a fantastic free trade deal.”

Conservative former minister Steve Brine said he and the Prime Minister “fell out” last year over the prospect of a no-deal Brexit, as he sought assurances that Mr Johnson still wants to secure a free trade agreement with the EU.

Mr Johnson replied: “It’s by passing this Bill tonight and in subsequent days that we will make the possibility of that great free trade agreement more real and we will get it done sooner.”

He claimed the Bill will “expedite” such a trade deal with the EU and other countries.

First Minister Arlene Foster has since accused the EU of treating Northern Ireland as its plaything.

She claimed the region has become a “bargaining chip” in trade talks between the bloc and the UK Government.

Mrs Foster was responding to Assembly questions on the controversy around the UK Government’s plan to override elements of the Northern Ireland Protocol through domestic legislation in the form of the Internal Market Bill.

She said her hope is the contention around the protocol can be removed with the striking of a comprehensive zero-tariff free trade agreement between the UK and EU.

The First Minister said she is “amazed” the UK/EU Joint Committee established to resolve outstanding issues around the operation of the protocol has not yet been able to iron out sticking points over state aid and at-risk goods.

Mrs Foster was asked specifically about a claim by UK chief negotiator Lord Frost that the EU has not provided guarantees it would give the UK approved “third country” status to allow it to move goods into the single market.

As Northern Ireland would effectively remain part of the single market for goods under the terms of the protocol, the UK Government has claimed the EU is essentially threatening to blockade its goods from entering the region.

That contention has been rubbished by senior figures across the EU.

“Wearing a mask…offers little, if any, protection from infection” – Harvard doctors

Biden: 'The Rise of White Supremacy' Is Among the 'Historic Crises' the Nation Faces

Where was ‘Cuties’ on Netflix Filmed?

Trump Bans TikTok After His First Video Gets 0 Views