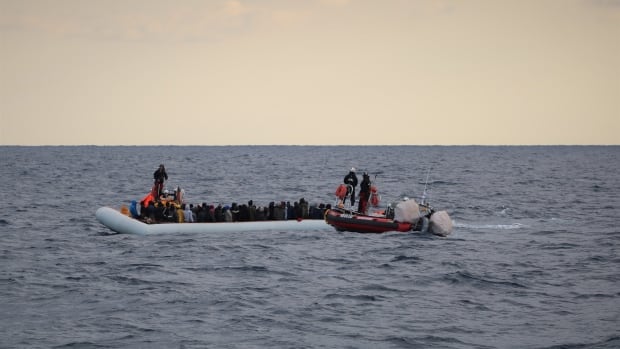 Migrants wearing lifejackets on a rubber dinghy are pictured during a rescue operation by the MSF-SOS Mediterranee run Ocean Viking rescue ship, off the coast of Libya in the Mediterranean Sea in February 2020. (Hannah Wallace Bowman/MSF/Handout/Reuters)

The U.N. migration agency said Tuesday that a boat carrying migrants bound for Europe capsized in the Mediterranean Sea off Libya, leaving at least two dozen people drowned or missing and presumed dead, the latest shipwreck off the North African country.

Safa Msehli, a spokesperson for the International Organization for Migration, told The Associated Press that Libya’s coast guard intercepted three boats on Monday, and one of them had capsized.

She said the coast guard retrieved two bodies, and survivors reported 22 others were missing and presumed dead.

At least 45 survivors on the three boats were returned to the shore. All migrants were men, with a majority from Egypt and Morocco, she said.

“This new tragedy signals yet again the need for increased search and rescue capacity in the Mediterranean. Instead, we are seeing restrictions on NGOs and long, unnecessary stand-offs,” Msehli said.

The shipwreck was the latest maritime disaster involving migrants seeking a better life in Europe.

In August, a boat carrying dozens of migrants capsized leaving at least 45 people drowned or missing and presumed dead, marking the largest number of fatalities in a single shipwreck off the coast of the North African country.

Libya, which descended into chaos following the 2011 uprising that toppled and killed longtime dictator Moammar Gadhafi, has emerged as a major transit point for African and Arab migrants fleeing war and poverty to Europe.

Coronavirus detected inside Gaza for 1st time, leading to lockdown

Mali junta wants to hold off on elections until 2023