Bill Cash erupted in the House of Commons as he lashed out at the European Union for wanting a level playing field. He said: “There has never been a level playing field in the EU. Their cardinal objective in these negotiations from the outset has included preventing us from being able to compete fairly. This is not good faith.

“Under the protocol they would even control our legal tax freedom but crate free ports and enterprise zoones.

“All of this would massively undermine our businesses and jobs and therefore our voters.

“Consider the wide legal sphere and legal state aid regulation, it is concerned not only with subsidies but also tax reliefs.”

SNP Westminster leader Ian Blackford went on to warn Tory MPs not to follow the Prime Minister by breaking the law.

READ MORE: Barnier on the brink: Macron tipped to STEP IN for Brexit talks 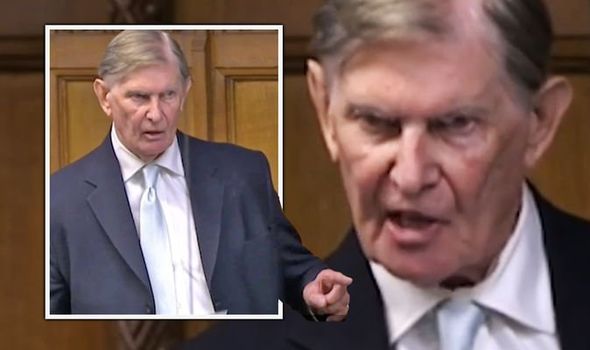 He told the Commons: “This is a test for the House this evening, do not wait for the committee stage. Legally, morally, ethically, the right thing to do is to vote down this Bill tonight and this House must be accountable.

“Do not follow the Prime Minister in acquiescing in breaking the law because if you vote for second reading tonight, that’s exactly what you’re all doing.

“So this is a test and I understand the challenge that Conservative members face – don’t support the Prime Minister by breaking the law this evening, it is as simple as that.”

Mr Cash: “On the question of international law, such law comes in all shapes and sizes. There are many instances of express overriding UK statute law.

Bill Cash said there has never been a level playing field in the EU (Image: PTV)

“The EU itself does sometimes break international law, including refusing certain compliance with WTO rules.

“EU retaliation by a blockade would be utterly unlawful.”

It comes as Boris Johnson defended his controversial plan to allow ministers to tear up the Brexit divorce deal by suggesting the European Union was being unreasonable and failing to negotiate in good faith.

The Prime Minister insisted the legislation, which would put the UK in breach of international law by breaking the terms of the treaty signed with Brussels, was a necessary “legal safety net” to protect the relationship between Great Britain and Northern Ireland.

As he sought to quell a growing Tory revolt over the measures, he claimed that passing the legislation would strengthen the hand of negotiators trying to strike a trade deal with the EU.

In an effort to reassure Conservative MPs, Mr Johnson said the measures contained in the Bill to set aside parts of the Brexit deal were an “insurance policy” that he hoped would “never be invoked” if an agreement was reached with Brussels.

And he promised that if it was necessary for the powers to be used, MPs would be given a vote on the regulations.

The Internal Market Bill sets out the way that trade within the UK will work once outside the EU’s single market and customs union.

US sends troops, armoured vehicles to Syria to counter Russia

U.S. Attorney Who Has Investigated Trump Associates Refuses to Resign

COVID and the CDC

Why Leverage is 1000x More Important Than Hard Work

Our Parents Want to Give Us Money, But…