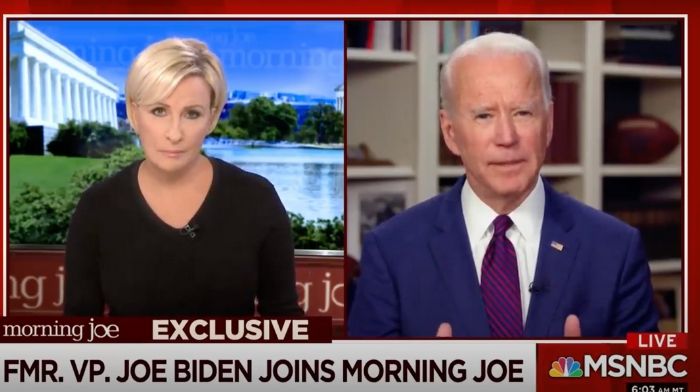 In a sad and unconvincing attempt at deflection and spin, Joe Biden sent a statement to MSNBC‘s “Morning Joe” before his Friday morning appearance on the show. The statement made a contrived hash of defending himself against serious rape charges made by his former Senate staffer Tara Reade. In the interview with show anchor Mika Brzezinski he regurgitated, like a broken automaton, the same points in a continuous loop.

“No, it is not true. I’m saying unequivocally it never, never happened and it didn’t. It never happened,” said Biden on the show, in likely contravention of the facts.

Biden said in the prior statement, “I am requesting that the Secretary of the Senate ask the Archives to identify any record of the complaint she alleges she filed and make available to the press any such document. If there was ever any such complaint, the record will be there.”

Notice no mention of the University of Delaware archives where the real info is located. Brzezinski asked the rape question at the beginning of the MSNBC interview and then moved on as quickly as possible to the usual Trump-bashing.

Biden vaguely further responded as best his limited abilities could permit, “I recognize my responsibility to be a voice, an advocate, and a leader for the change in culture that has begun but is nowhere near finished. So I want to address allegations by a former staffer that I engaged in misconduct 27 years ago.”

Then he dodged the issue. Biden went on with his preprogrammed spin, “She has said she raised some of these issues with her supervisor and senior staffers from my office at the time. They — both men and a woman — have said, unequivocally, that she never came to them and complained or raised issues. News organizations that have talked with literally dozens of former staffers have not found one — not one — who corroborated her allegations in any way. Indeed, many of them spoke to the culture of an office that would not have tolerated harassment in any way — as indeed I would not have.”

But BuzzFeed is reporting another story: “Over the last several weeks, and across several news outlets, several people who knew Reade at the time have said they had been told different aspects of her story. A former neighbor, Lynda LaCasse, told Business Insider that Reade detailed her full allegation of sexual assault in the 1990s. Both the New York Times and Washington Post reported they spoke with an unnamed friend who said Reade detailed the allegation at that time. The Intercept published a transcript of what Reade said was her mother calling into Larry King Live in 1993 to ask for advice about a generally negative experience her daughter had had with a ‘prominent senator.’”

This piece was written by David Kamioner on May 1, 2020. It originally appeared in LifeZette and is used by permission.

Sunset on the US Dollar

Congressman presses CFTC: Does it have jurisdiction over manipulative trading by government?

Protesters Took To The Michigan Capital Thursday Against Governor’s Stay At Home Order: “Tyrants get the rope”