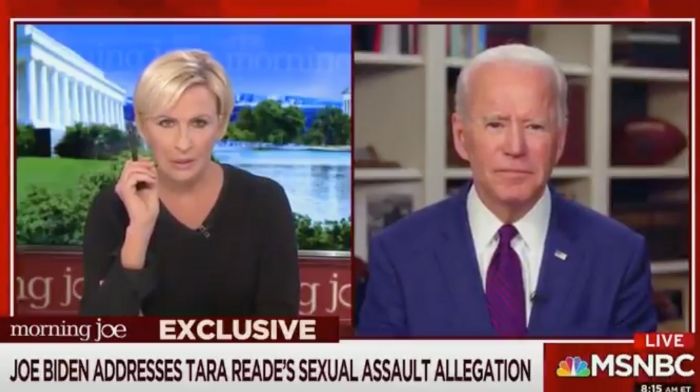 Presumptive 2020 presidential nominee Joe Biden was left speechless on Friday when he was called out by “Morning Joe” co-host Mika Brzezinski on his reluctance to release the records that are in his Senate papers at the University of Delaware.

Brzezinski asked Biden on Friday morning why the name of Tara Reade, who is accusing him of sexual assault, can’t be searched in the files. A clearly-rattled Biden at first responded by saying that he does not want classified material related to his conversations with former President Barack Obama to be made public.

“The material in the University of Delaware has no personnel files, but it does have a lot of confidential conversations that I had with the president about a particular issue, that I had with the heads of state of other places, that that would not be something that would be revealed while I was in public office, or while I was seeking public office,” Biden said. “To the best of my knowledge, no one else has done that either.”

“I’m just talking about her name, not anybody else,” Brzezinski responded. “Nothing classified with the president or anybody else. I’m just asking why not do a search for Tara Reade’s name in the University of Delaware records.”

After awkwardly pausing for five seconds, Biden asked Brzezinski who she thought should conduct the search, while Brzezinski kept trying to get him to be transparent.

Biden left momentarily speechless over the thought of authorizing a search of Reade’s name in UDelaware Senate records. Then says there would be nothing there.pic.twitter.com/JBHiJXOrw7

This comes after pressure mounted on the University of Delaware to release Biden’s records, as Reade has been calling on them to do so in order to hold him accountable for what she says he has done. She claims that Biden sexually assaulted her when she was working as a staffer in his Senate office back in 1993.

“Joe Biden, I want you to release all the personnel records from 1973 to 2009 and be transparent about your office practices,” Reade told Daily Caller. “I would like to hold you accountable for what happened to me, to how your staff protected you and enabled you, bullied me multiple times into silence.”

This piece was written by PoliZette Staff on May 3, 2020. It originally appeared in LifeZette and is used by permission.

As Stock Market CRASHES, Big Business Gets BIGGER! – How Monopolies Are Benefiting

Do THEY Continue To MANIPULATE Us With LIES?

Democrats Rebel, Won’t Return To Work May 4th, Say Its ‘Too Dangerous’ To Reopen Congress

THIS Is How They’re CONTROLLING THE NARRATIVE on COVID-19(84) You Won’t Believe How DRACONIAN It Is!

Trump spanks George W. Bush: 'Where was he during impeachment?

Silver hasn’t been this cheap in 5,000 years of human history

BREAKING: Former FBI General Counsel James Baker Has Flipped! Durham is Building Conspiracy Case on All of Those Who Lied to the Court!