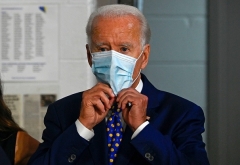 (CNSNews.com) – “We’re heading into a very dangerous autumn,” Democrat presidential candidate Joe Biden warned on Wednesday in a speech delivered near his home in Delaware.

He pointed to a University of Washington model that predicts coronavirus cases are going to spike in November, producing an additional 215,000 deaths. “That’s more than already died,” Biden said. “We need leadership right now to prevent that from happening.”

So what would Biden do?

He called for “uniform national guidelines”; “standards on social distancing that can be applied in particular circumstances in states and communities”; and “more effective approaches on testing and tracing.”

Biden did not provide details on the “national guidelines,” “standards,” or “more effective approaches” he is urging, although he seemed to endorse “universal masking.”

So we’re heading into a–a very dangerous autumn. The fact that the University of Washington model which the White House has previously touted projects that cases and deaths are going to spike this November and an additional by 215,000 Americans are going to die. Begin to spike in November but by the first of the year 215,000 will be dead additionally.

The University of Washington model shows if there is universal masking, these deaths could be projected–these deaths could be cut in half. …Donald Trump’s own director of CDC told him wearing a mask is the single most important step we can take to curb this virus. Here’s what he said, he said: “I might go so far as to say, that this face mask” and he held up a face mask, not this one, “is more guaranteed to protect me against COVID than when I take a COVID vaccine.” End of quote.

You know, I spoke with the experts today about additional steps we can take to prevent needless deaths and suffering between now and a universal vaccine being made available. Uniform national guidelines, they said, and standards on social distancing that can be applied in particular circumstances in states and communities on their particular–based on their particular circumstance. More effective approaches on testing and tracing.

If we do these things between now and January we can save even more lives. Last night, Donald Trump indicated he has no interest in doing these things. Folks, president’s first responsibility is to protect the American people, and he won’t. It’s utterly disqualifying.

President Donald Trump told a news conference on Wednesday that face masks are “a mixed bag” that “have to be handled very gently, very carefully.”

“I see that in restaurants — there are people with masks, and they’re playing around with their mask. And they have it–their fingers are in their mask and then they’re serving with plates. I mean, I think there’s a lot of problems with masks.”

“As far as the mask is concerned, I hope that the vaccine is going to be a lot more beneficial than the masks because people have used the masks,” Trump said. He added that masks “may be effective,” and he noted, “I wear them when I’m in a hospital or when I’m in a setting with a lot of (people).”

Trump said he doesn’t wear one most of the time because “I’m  tested,” and so are the people around him.

And I’m sometimes surprised when I see somebody sitting and–like with Joe (Biden). Joe feels very safe in a mask. I don’t know. Maybe he doesn’t want to expose his face. I don’t know what’s going on. He’ll be way away from people, nowhere near people. There’ll be nobody with him. He doesn’t draw any crowds. So, he’ll have circles, these big circles. They’ll be way far away. There’s no reason for him to have masks on.

We get tested. I’m tested. I have people tested. When people come into the Oval Office it’s like a big deal no matter who they are. If they’re heads of countries, they’ll get tested. So, I’m in sort of a different position. And maybe if I wasn’t in that position I’d be wearing it more. But I’ve worn masks. And especially I like to wear them when I’m in a hospital, not for me so much as for other people, okay?

Move In, Move Out: For In-Person College, Everything Rests On The First Few Weeks

Trump calls governors ‘weak,’ urges them to use force against unruly protests

When your 15 minutes of fame are long over

How to Succeed at Growing Zucchini in Containers