Argentina and Brazil are monitoring the movement of a 15-square-kilometer locust swarm in Argentina’s northeast that’s crossing South America.

The insects, which entered Argentina from Paraguay, are heading toward Uruguay. While they are not expected to affect Brazil’s crops, the nation’s agriculture ministry on Thursday declared a state of emergency in two southern states in order to allow officials to take preventive measures. 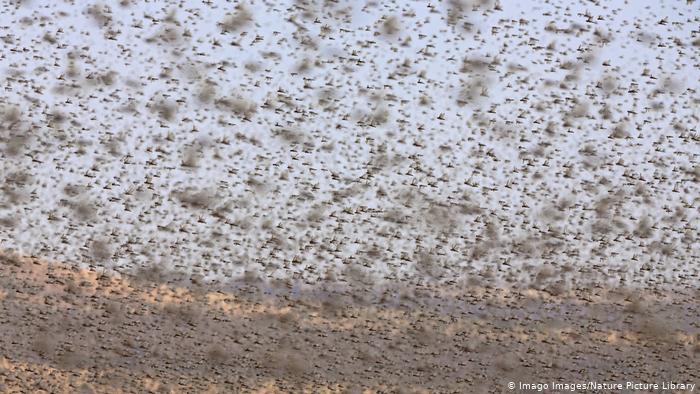 Argentine food safety body SENASA said the swarm, which initially entered Argentina from Paraguay in late May, contained about 40 million insects. It is in the province of Corrientes, near borders with Brazil, Uruguay and Paraguay.

Argentina and Brazil are among the world’s largest soy and corn exporters.

“We are following the movement of the plague,” Héctor Medina, a coordinator at SENASA, told Reuters on Thursday.

Due to the arrival of a cold weather front from the south, the movement of the locusts would be limited in the coming days, he added.

The low temperatures “will prevent them from moving and reproducing. The lethargy makes them stay still,” Medina said. Winds could eventually push the cloud of locusts into a neighboring country, he added.

Brazil’s agriculture ministry is also monitoring the swarm and has asked farmers in the south of the country to be on alert, although it has concluded that the locust cloud is unlikely to move into Brazilian territory for now.

Nevertheless, Farming Minister Tereza Cristina Dias, declared on Thursday a “phytosanitary emergency” in the states of Río Grande do Sul and Santa Catarina due to the swarm.

In Argentina, both SENASA and the Buenos Aires grain exchange said they were less worried by the locust swarm than issues of dry weather impacting crops.

“For now (the swarm) is not a problem, we are more concerned about the humidity issue for wheat planting than locusts,” said Esteban Copati, head of agricultural estimates at the exchange, who added the swarm was moving over a marginal farming areas.

The plague have raised concerns in Brazil

A representative from the Aprosoja growers association in Rio Grande do Sul said they feared the locusts would enter the state where corn is still being harvested and wheat being grown.

Eugenio Hack of the Copercampos cooperative in Santa Catarina told Reuters that if the locusts were to move to the state, producers would have to be trained to use the appropriate chemicals, which are different from those normally used.

“My grandfather dealt with locusts many years ago. Farmers used to dig ditches in the ground, cover insects with soil, and then set them on fire,” Hack said.

Wuhan back to normal: Life after lockdown

“Half Of The Internet Is Down” After Cloudflare Suffers Major Outage

A review of the past 72 hours: U.S. Consulate General in Chengdu closed

An UNEXPECTED Blessing. We’re So GRATEFUL

Oklahoma’s governor says he has tested positive for COVID-19

Ben Carson: It has become politically incorrect to talk about family values

Should I Use An Index Fund To Save For A House?

Gutfeld on Trump vs. the media during the COVID-19 pandemic

A New, More Serious Covid-19 Mutation To Worry About (D614G)