BBC Weather forecaster Louise Lear warned Britons hot air from Africa will continue to engulf most of the UK on Tuesday following temperatures reaching the highest level on record for September since 2016. Whilst parts of Scotland will see temperatures drop a little, most of the country will continue to bask in up to 30C. She said: “We had the warmest September day on Monday since 2016. For many it was a case of blue skies and sunshine, it was a beautiful September afternoon.

“Jersey had the top spot with 31C, not far behind with Charlwood in Surrey and London with 29C.

“And the reason being this area of high pressure centred across Europe that is allowing this southerly flow to drag in some very warm air all the way from Africa.

“So we’re seeing temperatures unusually high for the time of the year but things will change subtly as we go through Tuesday with weak weather fronts causing shower outbreaks for Scotland for parts of the day.

“Still relatively mild to start however, double digits across the country, but there will be some rain, not heavy persistent rain that we have seen and it will weaken as we go through the afternoon.”

She added: “We keep, for many of us, dry, settled, sunny conditions, light winds and plenty of warmth to go with it.

“Temperatures again quite widely in mid to high 20s. We might see 30C perhaps nearer to East Anglia.” 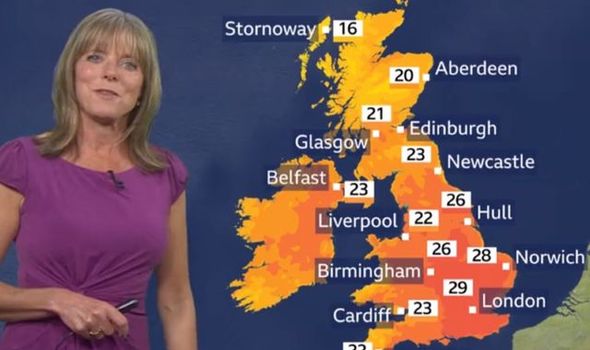 The plume of heat will embrace most parts of England and Wales.

In its outlook from Tuesday to Thursday, the Met Office said most places will stay “dry and warm”.

The forecast read: “Many places dry and warm on Tuesday, hot across the southeast.

“A few showers possible in the north and west.

“Turning cloudier and cooler from the north Wednesday and Thursday.”

However, the balmy weather is not expected to last, and weather maps show temperatures could dip to 2C in the first Autumn freeze of the season.

Weather maps from WXCHARTS show most of Scotland will have temperatures of 2C on Thursday, September 17, while northern England can expect 8C.

The forecast said: “There is potential to see more unsettled conditions becoming more widespread across the UK at times, bringing spells of wet and windy conditions with temperatures falling closer to average.”

In its forecast from September 27 to October 11: “The UK is likely to see alternating periods of relatively settled weather, bringing an increased risk of mist and fog in the morning, and more unsettled conditions, which would see typical autumnal wet and windy weather.

“Overall, temperatures are expected to average out during this period around or slightly above the normal.

“However, variations are to be expected as a result of the shifting weather systems, giving potential for both warm and cold spells.”

Donald Trump to Suspend Payroll Tax Until End of 2020

Courthouse set on fire during protest in California

‘We Love You Too Much to Open Our Doors’: Andy Stanley Shares Why His Church Won’t Reopen until 2021

The ‘fundamental uncertainty’ of a double-dip recession

Rep. Gohmert talks push to ‘ban the Democratic Party’ over past slavery ties

America Is Giving Up on the Pandemic