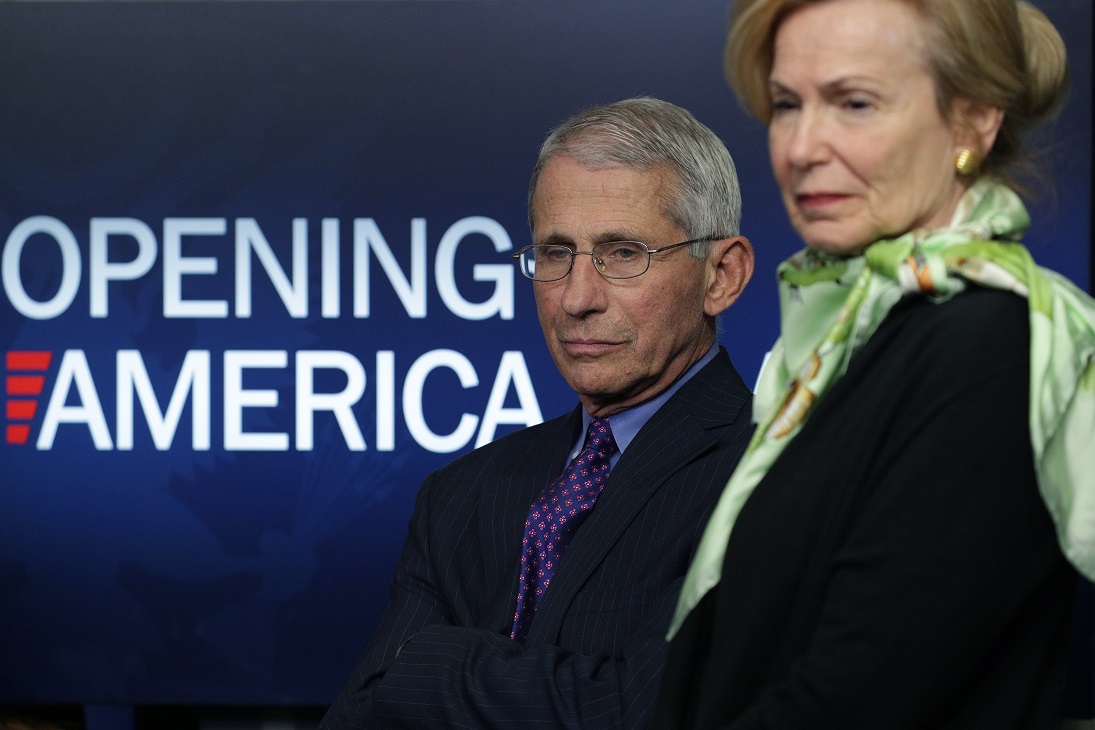 Now that President Donald Trump has wisely decided to downplay his press conferences regarding the CCP virus with the snarling jackals of the media, it’s time for the White House to move on to far more important matters.

From the available data, and the increasing preponderance of the evidence, the Chinese Communist Party virus, which causes the disease COVID-19, has turned out to be only slightly more lethal than a normal seasonal flu—but the damage it’s done to our nation’s economy, our Constitution, and our sense of national pride has been incalculable. Forget the pandemic—it’s time to flatten the panic curve.

The fact is, the United States has just gotten a good long look at the ugly face of fascism, brought on by an overreliance on medical professionals with great taste in scarves, preening for the cameras and basking in media adoration, but without an ounce of domestic policy sense.

They’ve been aided and abetted by a hostile, ignorant White House press corps—when all you know is politics, everything looks political—intent on counting coup against the president and determined to keep alternative viewpoints from the public as long as they can.

In this, they have willing collaborators in Big Tech, which has inflicted its peculiar brand of censorship via YouTube and Facebook to make sure nothing escapes the Washington bubble’s imprimatur regarding what constitutes acceptable public opinion.

Prime example: a YouTube video featuring two doctors in rural California, Dan Erickson and Artin Massihi who, having conducted more than 5,000 coronavirus virus tests, concluded, “We always have between 37,000 and 60,000 deaths [from flu] in the United States, every single year. No pandemic talk. No shelter-in-place. No shutting down businesses. Do we need to still shelter in place? Our answer is emphatically no.”

For this effrontery, and despite the fact that the video was posted by a local ABC affiliate in Bakersfield, YouTube took it down, claiming it violated the channel’s increasingly tetchy “terms of service.”

Let’s look at the facts. As Dr. Scott Atlas, the former chief of neuroradiology at Stanford University Medical Center, notes, “the vast majority of people do not have any significant risk of dying from COVID-19.”

Worse, flattening the curve—the original stated goal of the statists—does nothing to prevent the disease; rather by isolating people in “cocoons,” it simply delays the inevitable point at which most people have had the virus, created antibodies, and “herd immunity” is achieved.

But, of course, it’s not about flattening the curve to prevent the hospitals from being overwhelmed by Covid-19 patients any more. Like most of the apocalyptic forecasts, the predicted surge never occurred.

The Navy hospital ship Comfort, sent to New York City with much fanfare, is heading back to home port in Norfolk, Va., having treated all of 182 patients; the Javits convention center, retrofitted as a 2,500-bed hospital for non-corona patients, only ever saw about 500 beds actually used.

Instead, the goal posts have been moved. This is the “new normal,” some cry, and that we’ll all be staring into the future behind face masks, forever. We can’t reopen until we have a vaccine, say others—never mind that we don’t even have a vaccine for the common cold.

Nor is the media’s current metric of testing of much use, since testing only tells us whether you have, or possibly have had, the virus and has no predictive or prophylactic value whatsoever. As history shows over and over, sometimes even bad things simply have to run their course.

That won’t stop the Left from blaming the pandemic on the Trump administration. “If an American president loses more Americans over the course of six weeks than died in the entirety of the Vietnam War, does he deserve to be re-elected?” asked an aggressive reporter the other day.

Never mind that, on average, nearly 8,000 American die every day, which equals that war’s death toll in a single week. Further by way of comparison, some 80,000 Americans died of the flu and its complications during the 2017-18 season—and who’s afraid of the flu? If you’re an American living anywhere but New York City and its immediate suburbs, you have next to no chance of catching Covid-19.

As is their wont, the Left and its media lackeys have been appealing to the natural human desire for safety as if that were the only factor worth considering. But it’s not. We know whom the disease especially targets—the very elderly, the infirm, the obese, the comorbid. We can protect these people, insofar as many are nearing the end of their lives anyway, without punishing or beggaring the rest of the population.

That’s where the president comes in. The president cannot, on his own toot, command that the country reopen tomorrow. Under our federalist system, that authority lies with the governors, some of whom, such as Kristi Noem in South Dakota, never closed their states in the first place. (“I took an oath to uphold the United States Constitution,” she explained.)

But he can lead by example—by relishing his role as the chief executive and defender of the Bill of Rights, and making sure that freedom under the rule of law—not “safety,” remains the primary American value.

With that in mind, Attorney General William Barr has ordered the fleet of U.S. attorneys across the country to monitor the actions of the more extreme governors (California’s Gavin Newsom, Virginia’s Ralph Northam, Michigan’s Gretchen Whitmer, and New York’s Andrew Cuomo come immediately to mind) for possible violations of the Bill of Rights, especially the right to freely practice one’s religion and the right of peaceful assembly.

“I am directing each of our United States Attorneys to also be on the lookout for state and local directives that could be violating the constitutional rights and civil liberties of individual citizens,” he wrote.

As the death toll from Covid-19 recedes, though, the Left has a new weapon to use against the hated Trump: the coming economic recession that they have long predicted and now, in part thanks to them, will arrive just in time for the election.

At the same time, they’re frantically advocating a mail-in election, something that will only magnify the kinds of found-ballot fraud that has won important elections in Washington State, Connecticut, and Minnesota, for leftist candidates over the past couple of decades.

Meanwhile, the threats from abroad haven’t ceased. Nobody knows what North Korea’s Kim Jong-un is up to, or even whether he’s still alive. The Russians haven’t stopped playing their version of the Great Game on the oil and other geopolitical fronts. And China needs to be punished severely for its CCP virus mischief, especially if it can be proven that Covid-19 was a lab-grown, malicious attack on the United States and the West.

If the president wants to win re-election, he’s right to stop jousting with the press corps, and instead to break out Old Glory and announce that this unconstitutional and economy-busting overreaction is over—and will never happen again.

Michael Walsh is the author of “The Devil’s Pleasure Palace” and “The Fiery Angel,” both published by Encounter Books. His latest book, “Last Stands,” a cultural study of military history, will be published later this year by St. Martin’s Press. Follow him on Twitter @dkahanerules.

Here’s What Happens To The Cows And Pigs When Meat Processing Plants Close. PETA Isn’t Happy

How Much ‘Capital Transfusion’ Has New York Provided to Communist China?

Editorial: There Is A Cure for the Chinese Communist Party Pneumonia—Say No to the CCP

For Democrats, A Lesson Learned Is An Oppression To Be Repeated

Short of Another Great Awakening, America May Split Up … Or Worse

Stocks Jump Higher And Close In On Best Month Since 1974