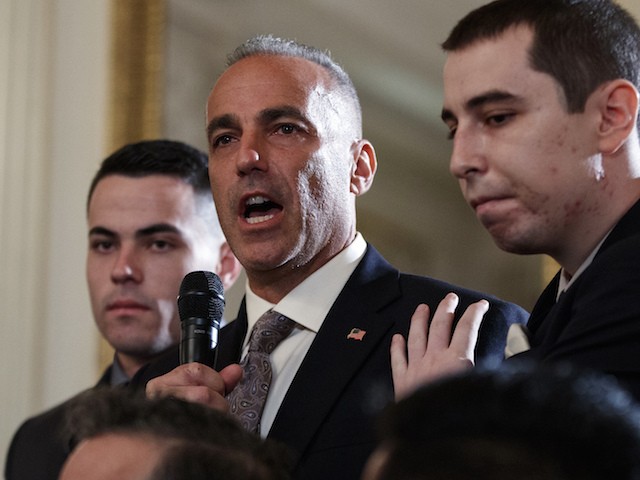 My daughter Meadow was murdered in the Parkland school shooting. I haven’t smiled since. I don’t think I’ll ever smile again. But last week, the Broward County School Board demanded my psychiatric records — among those of other Parkland parents — to prove that I’ve suffered.

That might shock you. It shouldn’t. It did not surprise me at all. I’ve seen what happens when politically correct “anti-racist” ideology replaces human decency in a public school system.

If Joe Biden is elected president, you’ll find out too.

After my daughter was murdered, I wanted to know everything that went wrong. And I exposed it all in my book Why Meadow Died. I learned that our school districts had a policy to allow convicted rapists and murderers back into normal classrooms. That it gave students three free misdemeanors every single year. That principals were systematically sweeping problems under the rug to make themselves look good under “restorative justice” discipline policies. That the district took a kid who told them he wanted to kill, that he dreamt of being covered in blood, and put him in school with my daughter.

When parents started to learn about these policies, we came to the school board demanding answers. Broward Superintendent Robert Runcie heard our concerns and then said “I really find it ironic that folks are coming to lecture the district on our discipline [policy], when a couple of weeks ago I received a letter from the ACLU,” saying that said Broward hadn’t gone far enough on restorative justice.

That’s right. He looked parents whose children were murdered because of his policies in the eye and told them their concern was “ironic” because a left-wing organization said he hadn’t gone far enough with his leftist policies.

The more the Parkland parents learned, the more we demanded accountability. So the school district slandered us as racists. The district announced a public meeting on school safety, and Superintendent Runcie knew we would be there. So his deputy sent out an e-mail to black church leaders accusing us of using “vile language” not seen “since desegregation orders were enforced.”

It was a lie, and they knew it. But the district packed the meeting with their supporters. When parents whose children were murdered because of the leadership of Robert Runcie (who happens to be black) called for accountability, the audience booed them as racists.

This is the kind of leadership our public schools have. If your child gets murdered and you want answers and accountability, they’ll smirk at you, slander you as racist, and harass you in court.

“Not my school,” you might be thinking. Maybe not now. But soon.

You see, Broward County was ground zero for these “restorative justice” policies that got rid of consequences and let dangerous behavior run wild because school bureaucrats thought it was the way to fight “systemic racism.” The Obama administration took Broward’s policies and coerced school districts serving millions of students across the country to adopt them. President Trump put an end to that, but if Biden is elected, the dangerous policies that caused Parkland will be forced into your kids’ school.

But the danger goes beyond just those discipline policies. The ideology behind these policies – and behind the Broward school district’s behavior – is a politically correct cancer known as “Critical Race Theory” or “anti-racism.” The logic, if you can call it that, goes like this: “We are fighting racism. Anyone who disagrees with us, therefore, is racist. And racists are evil.”

President Trump has promised to put an end to indoctrination through Critical Race Theory. But if Biden is elected, it will almost certainly become a mandatory feature of American public education.

If Biden is elected president, your children will be less safe in school. They will be taught Black Lives Matter ideology. And your kids’ teachers will be trained to understand any objection that you have to anything that they do is a sign that you are a white supremacist. And if your kid ends up getting murdered in school, and you have a problem with it, they’ll attack you.

There’s a chance at staving this all off if President Trump is re-elected. His administration will go after this politically correct cancer. Parents could still have a say in how their schools are run, and whether the school prioritizes student safety over “anti-racist” ideology.

I had no idea what was going on at my daughter’s school, and who was really running it. You don’t have that excuse. If President Trump loses, pull your kids out of public schools. Or keep rolling the dice with their lives, and keep entrusting them to people that will call you racist if you’re upset when your kids get murdered.

Andrew Pollack is the father of Meadow Pollack and author of Why Meadow Died: The People and Policies that Created the Parkland Shooter and Endanger America’s Students.

Trump During Debate: ‘You Can’t Close Up Our Nation or You Won’t Have a Nation’

Clyburn: 'Donald Trump Is Not a Good Person' – 'He Disdains African-American Women'

Trump Accuses Biden of ‘Taking Something’ to ‘Pep Him up’

Bobulinski: I Came Forward Because Schiff Accused Me of Being Part of Russian Disinformation