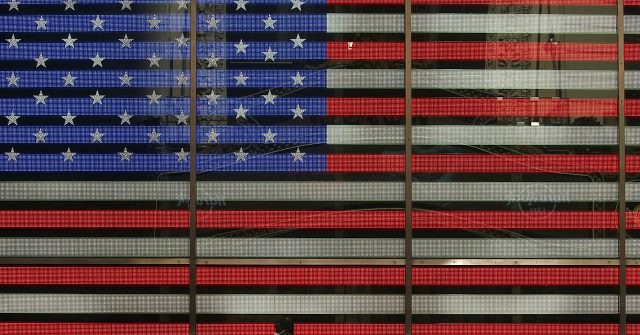 For weeks, the American people have faced daily orders, graphs, tables, news stories, and press conferences detailing the coronavirus’s devastating impact on the country, from thousands of deaths to a 21-trillion-dollar economy brought to its knees.

It seems hard to believe that just a few months ago, the world watched a Swedish teen sail across the Atlantic from Europe to New York to send a message that the threat from climate change meant society had to drastically change how it operates, including bringing planes down from the skies, plugging oil and gas wells and pipelines, getting vehicles off the roads, and halting agriculture’s life-sustaining production of meat, dairy, and other food products.

Then a virus dubbed COVID-19 to set it apart from other coronavirus strains stealthily spread from Central China around the globe, killing — to date — 182,359 people.

And now, even in the midst of a deadly pandemic that has caused more than 20 million Americans to lose their jobs, Greta Thunberg and many others see this as a once-in-a-lifetime opportunity to irrevocably change the United States from the most prosperous free-market Republic to something unrecognizable to the country’s founders and those who loved pre-virus America.

Thunberg is back in Sweden, and her weekly climate strikes are on hold, but this too is a reality: U.S. and global air traffic has almost ground to a halt, oil traded in negative territory last week for the first time ever, and farmers have been forced to dump milk, break fertilized eggs, and slaughter livestock to cope with the new glut.

Those who see promise in this health and economic crisis are not shy about spelling out what they hope lies ahead for America.

The headline on the self-described socialist Democrat Jacobin online magazine seems to perfectly sum up the left’s hope for a utopian future; “Now Is the Time to Fundamentally Transform America,” the headline said.

The writer then put out a wishlist of those hopes, including nationalizing the nation’s banks: “Shareholders will whine, but without a state-led rescue, the value of their stock would fall close to zero anyway.”

The writer also called for a national takeover of the financial markets: “The goal should be to turn finance into something like a utility.”

The writer wants the creation of the “Reconstruction Finance Corporation,” to finance the Green New Deal, a “deal,” according to a Heartland Institute report, that “would cause unimaginable harm to the environment, wildlife, and humans.”

“It would be a publicly capitalized bank that would evaluate and fund projects like clean energy generation and new models of food production,” the Jacobin writer wished.

And, finally, a call for universal health care has been sounding.

This week, the Congressional Progressive Caucus held a virtual press conference on Facebook to let their demands be known for what should be included in any legislation Congress puts forth to provide relief from the coronavirus outbreak. Those demands include guaranteed income for individuals and families for an extended period of time, universal health care, debt forgiveness, and housing guarantees. These left-wing Democrats also support the Green New Deal.

In her remarks, Rep. Rashida Tlaib (D-MI) praised poet and Planned Parenthood activist Sonya Renee Taylor for her take on how beating the coronavirus should not be a pathway back to normalcy.

We will not go back to normal. Normal never was. Our pre-corona existence was never normal other than we normalized greed, inequity, exhaustion, depletion, extraction, disconnection, confusion, rage, hoarding, hate and lack. We should not long to return, My friends. We are being given the opportunity to stitch a new garment. One that fits all of humanity and nature.

Perhaps one of the most unpredictable sidebars to the coronavirus crisis has been how radical environmentalists have seen a silver lining in a global economic shutdown because, although people may be suffering and dying, animals are now freely roaming city streets and the air in the skies over the biggest polluter in the world — China — are clearer, even if the virus killed more Chinese people than will probably ever be known.

Wired magazine put it this way: “This Is Our Chance to Reinvent Cities,” and they compared vehicle traffic to the virus:

If the streets are a city’s veins, cars are the blood coursing through them—but they’re a pathogen, of sorts. Cars killed over 6,000 pedestrians in 2018 in the US, and air pollution kills perhaps 200,000 more here each year. With all those cars now sequestered in garages, air quality around the world has gone through the roof. In March, for instance, researchers at Columbia University calculated that carbon monoxide emissions in New York City, mostly coming from vehicles, fell by 50 percent. With that will come a dramatic improvement in public health, and at just the right time: New research from the Harvard T.H. Chan School of Public Health has shown that air pollution is associated with higher Covid-19 death rates. They did this by looking at 3,000 US counties and comparing Covid-19 deaths and levels of fine particulate matter in the air. They found that even small increases in long-term exposure to the pollutants leads to significantly higher mortality. That makes sense, since this is a disease that attacks the lungs.

But maybe our suddenly clearer skies don’t have to be temporary. We’re getting a taste of how much more livable our cities would be if we designed them for people, not cars. Closing roads to cars altogether—as cities like Boston and Oakland, California, have done during the crisis—means people can walk and bike in safety, itself a boost to public health.

“We call this a ‘psychic outcome,’ of people realizing what we’ve absorbed from the slow intensification of urban life as it relates to vehicles,” Gurney said. “It’s potentially a moment where we can get a clearer picture of what we’ve slowly kind of numbed ourselves to. Cities are profoundly dominated by vehicles.”

Done incorrectly, though, a rethinking of cities could exacerbate inequalities. Cities have, necessarily, severely curtailed public transportation to curb the spread of the new coronavirus. But this disproportionately affects those who can’t afford cars, and who might rely on public transport to get to their essential jobs or shop for food.

Democrats also see the coronavirus outbreak as a chance to advance their vote-by-mail agenda, CNN reported this month:

The pandemic has reshaped much of American life, and the prospect of having millions of Americans head to the polls in November is raising serious questions about balancing the right to vote with public health.

The solution proposed by Democrats and voting rights experts and advocates is to expand voting by mail. But those calls are facing resistance from many state and national Republicans, who have long opposed efforts to expand voting access and instead have supported stricter measures like voter identification laws, which they argue ensure the integrity of the electoral process.

Congressional Democrats asked for billions to expand the use of absentee voting but got just $400 million in the $2 trillion stimulus package approved last week. Before that, Democratic Sens. Ron Wyden of Oregon and Amy Klobuchar of Minnesota introduced a bill in March that would have added $500 million in federal money to prepare state election systems for the coronavirus.

A Townhall editorial pointed out some of the ironies popping up as Americans rally to save the country and its people, while others have a more globalist happy ending:

Oxford professor Peter Frankopan, in an opinion piece titled, “Pandemics are terrifying but they can make the world better,” brazenly shames our manufacturing industry and the millions employed in good-paying jobs, saying “… [the] world’s lungs are already breathing more easily thanks to the collapse of industrial production.”

“Coronavirus has basically turned off the global economy,” Jamie Henn, climate activist and co-founder of 350.org—a nonprofit organization rabidly committed to ending the use of fossil fuels—tells Vox. “Let’s install a new operating system before we turn it back on.”

The same industry leaders and innovators stepping up to defeat the coronavirus are the same people who will help solve whatever climate woes we face. And they’ll do so without delivering another devastating blow to our economy and without leaving behind the 10 million Americans out of a job and wondering where their next meal or rent payment will come from.

The contrast between industry stepping up to help across-the-board in a time of crisis, and activists’ attempt to exploit the crisis couldn’t be more illuminating.

While countless Americans have found a silver lining in this health crisis, from spending more time with their family to volunteering to help others in need, many fear that some are determined to take advantage of uncertainty and fear to remake a country that is unrecognizable as a nation before a rogue virus reared its ugly head.

While everyone is watching the meltdown in the crude oil market, the global market for natural gas is also cratering.

Gaetz: If Mueller Knew Flynn Deal Was a Set Up, His Bar License Might Be in Question

On the Ground at the Patriots Rally to Reopen Arizona