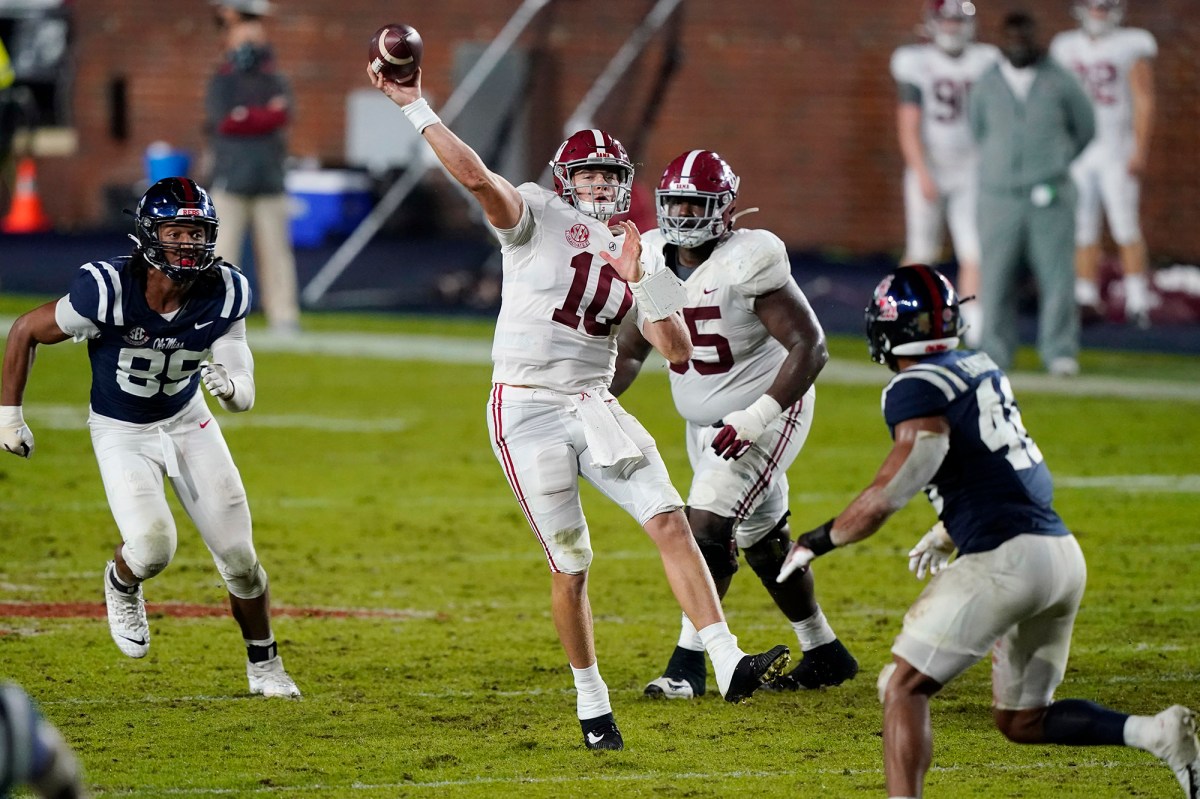 The marquee game of the college football weekend is the SEC matchup between Georgia and Alabama in Tuscaloosa, Ala. The Crimson Tide are favored by 4.5 points with a total of 58.5.

Jones has elite wide receivers in DeVonta Smith, Jaylen Waddle and John Metchie, who have combined to catch 57 balls for 1,010 yards and seven TDs through three games. Alabama leads the nation in scoring (51.0 ppg) and is ranked second in passing yards (385.0 ypg) and third in total offense (560.3 ypg).

Alabama’s defense, however, has issues galore. The Tide are ranked 66th nationally (out of 76 FBS teams currently playing) in total defense and 70th in pass defense (322.3 ypg).

Georgia is off its best offensive performance, in a 44-21 home win over Tennessee. The Bulldogs are getting outstanding quarterback play from Stetson Bennett, who has five touchdown passes without an interception and one rushing score. The Over is the way to go here.

Here are some other things to know about Saturday’s slate:

Pittsburgh at Miami: The line was Miami -10 early in the week, but has jumped to Hurricanes -13. The move indicates Pitt’s star QB, Kenny Pickett, is unlikely to be in uniform. Pickett, who leads the nation in passing yards (1,389) and has an 8-to-3 TD-INT ratio and five rushing touchdowns, injured his ankle in the third quarter of last week’s 31-30 overtime loss at Boston College.

Pickett continued to play after missing a few snaps, but he was limping badly the rest of the way. Even if he can play, he won’t be near 100 percent.

Pitt has lost back-to-back games by two combined points, dropping a 30-29 decision at home to North Carolina State two weeks ago. It’s reasonable to assume team morale will be an issue for the Panthers, who are mired in a 0-3-1 ATS slide in their last four outings.

The noon kickoff in Miami helps, too. The October heat in South Florida is as stifling as August temperatures everywhere else. Before last week’s loss at top-ranked Clemson, Manny Diaz’s team had won all three of its games — vs. UAB, at Louisville and vs. Florida State — by 17, 13 and 42 points, respectively. The ’Canes are in bounce-back mode to deal out woodshed treatment to the Panthers.

Duke at North Carolina State: Head coach David Cutcliffe has taken over Duke’s play-calling this year and the team put together its best offensive performance of the season last weekend at Syracuse. The Blue Devils gained 645 yards of total offense including 363 yards on the ground (5.8 ypc) and had a 36-11 edge in first downs in a 38-24 victory (they would have scored even more if not for committing four turnovers). Duke has committed 19 turnovers in just five games.

N.C. State (-4) made the change at sophomore QB Devin Leary and have won consecutive road games at Pittsburgh and Virginia. However, the defense hasn’t been stellar, and the Wolfpack have been outgained in each of their last three games.

This is a role-reversal game, as the Wolfpack were road underdogs for three straight weeks. Now they come home as a small favorite. Duke has shot itself in the foot all season with turnovers (-11 margin), but has been more explosive on that side of the ball.

Lancashire boy, 15, is pushed off his bike by a man in a passing car

In Portland, a peaceful protest caravan rolls on

Seattle Mayor to Shut Down CHAZ After Shootings Leave One Dead, Two Wounded

SARAH VINE: How could No10 let free school meals turn into a dog's dinner?

Czech hospitals are three weeks from being overwhelmed, PM warns

Does anyone even use bottle openers anymore? (Video)

What is QAnon? Why it's dangerous and how Christians can respond

The Hidden Secrets To Building Wealth In Paradise | Step By Step

Bitcoin is like 'digital gold' and won't be used the same as a traditional currency in at least 5 years, billionaire investor Mike Novogratz says