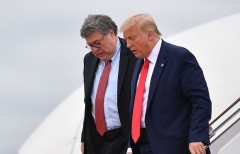 Instead of debating policy, Barr said, legal pundits speculate “ad nauseum” that “some action by the President, a senior official, or a member of Congress constitutes a federal felony under this or that vague federal criminal statute.”

Barr warned, “This criminalization of politics is not healthy.”

The criminal law is supposed to be reserved for the most egregious misconduct — conduct so bad that our society has decided it requires serious punishment, up to and including being locked away in a cage.  These tools are not built to resolve political disputes, and it would be a decidedly bad development for us to go the way of Third World nations where new administrations routinely prosecute their predecessors for various ill-defined crimes against the state.  The political winners ritually prosecuting the political losers is not the stuff of a mature democracy.

The Justice Department abets this culture of criminalization when we are not disciplined about what charges we will bring and what legal theories we will bless.  Rather than root out true crimes — while leaving ethically dubious conduct to the voters — our prosecutors have all too often inserted themselves into the political process based on the flimsiest of legal theories.

We have seen this time and again, with prosecutors bringing ill-conceived charges against prominent political figures, or launching debilitating investigations that thrust the Justice Department into the middle of the political process and preempt the ability of the people to decide.

This criminalization of politics will only worsen until we change the culture of concocting new legal theories to criminalize all manner of questionable conduct.  Smart, ambitious lawyers have sought to amass glory by prosecuting prominent public figures since the Roman Republic.  It is utterly unsurprising that prosecutors continue to do so today, to the extent the Justice Department’s leaders will permit it.

As long as I am Attorney General, we will not.

Our job is to prosecute people who commit clear crimes.  It is not to use vague criminal statutes to police the mores of politics or general conduct of the citizenry.  Indulging fanciful legal theories may seem right in a particular case under particular circumstances with a particularly unsavory defendant — but the systemic cost to our justice system is too much to bear.

Trump approves plan to withdraw 9,500 US troops from Germany

Here’s the video Democrats don’t want you to see…

The birth of a militia: how an armed group polices Black Lives Matter protests

#Conservative #Cowards Are To Blame For Falling Statues https://t.co/47hIgNdm8G