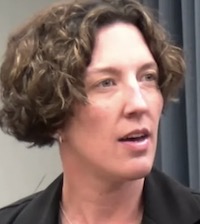 Dr. Leah Torres, an Alabama abortion doctor famous for making inflammatory statements on social media, had her medical license suspended by the Alabama Board of Medical Examiners late last month.POLL: What will have the biggest impact on the election?

According to AL.com, Torres, who had been serving as medical director of West Alabama Women’s Center in Tuscaloosa on a temporary license, was denied certification for lying on her application.

“The Board denied an application for a certificate of qualification on Aug. 19, and on Aug. 27 temporarily suspended her license to practice medicine ‘until a hearing is held on the allegations against her,’” the report stated. “The letter of notice from the Board of Medical Examiners says that Torres, in her application, gave false answers to several questions including whether her staff privileges had ever been revoked or suspended at any hospital or health care facility.”

The letter of notice also stated that Torres made “public statements related to the practice of medicine which violate the high standards of honesty, diligence, prudence, and ethical integrity demanded from physicians licensed to practice in Alabama.”

The Daily Wire reported that, back in 2018, Torres made national headlines for a since-deleted Twitter post bragging about cutting a fetuses “cord” before they have an “opportunity” to scream.

“So [if] it’s not for the money, is it because you just like infanticide?” one Twitter user asked Torres. “Do you hear their heartbeats when you lay down at night? Do you hear their screams?”

The abortionist responded: “No. You know fetuses can’t scream, right? I transect the cord 1st so there’s really no opportunity, if they’re even far enough along to have a larynx.”

“I won’t apologize for performing medicine,” added Torres. “I’m also a ‘uterus ripper outer,’ if that’s how you’d like to describe hysterectomy.”

In response to the suspension, a spokeswoman for the West Alabama Women’s Center, said the board’s decision was “based on misunderstandings.” more

Meeting The Beatles In India (Trailer)

Unmarked graves near gold rush settlement to be explored

Thousands of accounting students are checking in at hotels across Canada. And no, it's not for a vacation

India and Bangladesh are already suffering with coronavirus. Now a super typhoon is heading their way