Today as people took to streets in the United States and in several other places in all around the world to denounce racism and police brutality, a spark of optimism shines in the gloomy horizon, a beacon of hope is re-kindled re-assuring us all that we can still dream that one day all races will be regarded on equal footing and that racism will be a thing of the past.

The civil movement that is now taking shape in the United States and across the world is a catalyst for progressive structural reforms and transformations. However, we need to keep in mind that regardless of the systemic reforms this movement can probably give rise to, laws alone are not enough to beat racism because racism is an ideology and the only thing that can defeat an ideology is an effective counter-ideology.

History abounds with examples. Did military action completely eradicated terrorism? No, it did not. Yes,  it destroyed its infrastructure and succeeded in dismantling active terrorist cells which, in effect,  has tremendously decreased the looming threat of terrorist attacks. But the terrorist ideology is still out there which explains why the phenomenon of ‘lone wolves’ is on the rise. Only through enlightened education and critical thinking that minds get to be liberated from the shackles of ideology and bigotry and get to embrace and celebrate human diversity. 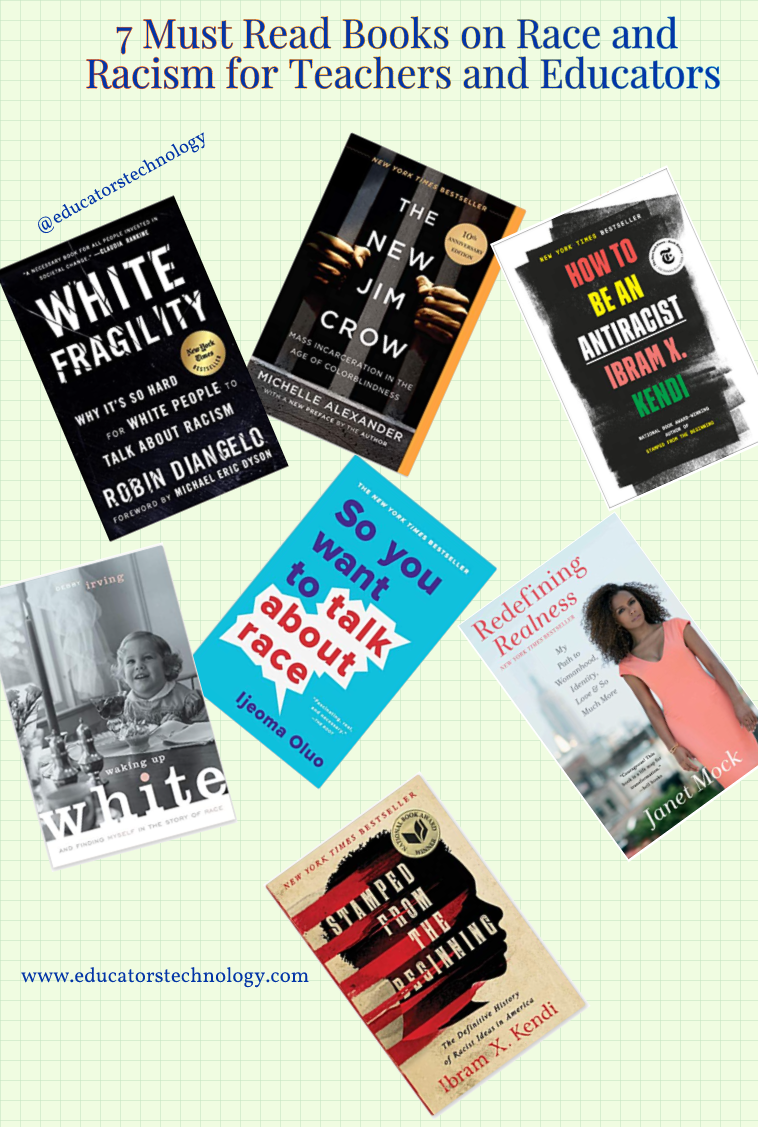 In the spirit of raising teachers, educators, and students awareness about the problem of race and racism, and after we have shared some

to use in class, today’s post features a collection of some of the trending books on race and racism as featured in

. We invite you to check them out and share with your colleagues. If you are to read only one book from this selection, we highly recommend Robin DiAngelo’s

White Fragility: Why It’s So Hard for White People to Talk About Racism

Please note all the links included in this post are Amazon affiliate links which allow us to make a tiny profit from your purchases.

1- White Fragility: Why It’s So Hard for White People to Talk About Racism , by Robin DiAngelo

“In this “vital, necessary, and beautiful book” (Michael Eric Dyson), antiracist educator Robin DiAngelo deftly illuminates the phenomenon of white fragility and “allows us to understand racism as a practice not restricted to ‘bad people’ (Claudia Rankine). Referring to the defensive moves that white people make when challenged racially, white fragility is characterized by emotions such as anger, fear, and guilt, and by behaviors including argumentation and silence. These behaviors, in turn, function to reinstate white racial equilibrium and prevent any meaningful cross-racial dialogue. In this in-depth exploration, DiAngelo examines how white fragility develops, how it protects racial inequality, and what we can do to engage more constructively.”

2- How to Be an Antiracist, by Ibram X. Kendi

“Kendi weaves an electrifying combination of ethics, history, law, and science with his own personal story of awakening to antiracism. This is an essential work for anyone who wants to go beyond the awareness of racism to the next step: contributing to the formation of a just and equitable society.”

3- Stamped from the Beginning: The Definitive History of Racist Ideas in America , by Ibram X. Kendi

“In this deeply researched and fast-moving narrative, Kendi chronicles the entire story of anti-black racist ideas and their staggering power over the course of American history. He uses the life stories of five major American intellectuals to drive this history: Puritan minister Cotton Mather, Thomas Jefferson, abolitionist William Lloyd Garrison, W.E.B. Du Bois, and legendary activist Angela Davis. As Kendi shows, racist ideas did not arise from ignorance or hatred. They were created to justify and rationalize deeply entrenched discriminatory policies and the nation’s racial inequities. In shedding light on this history, Stamped from the Beginning offers us the tools we need to expose racist thinking. In the process, he gives us reason to hope.”

4-  Waking Up White, and Finding Myself in the Story of Race, by Debby Irving

“For twenty-five years, Debby Irving sensed inexplicable racial tensions in her personal and professional relationships. As a colleague and neighbor, she worried about offending people she dearly wanted to befriend. As an arts administrator, she didn’t understand why her diversity efforts lacked traction. As a teacher, she found her best efforts to reach out to students and families of color left her wondering what she was missing. Then, in 2009, one “aha!” moment launched an adventure of discovery and insight that drastically shifted her worldview and upended her life plan. In Waking Up White, Irving tells her often cringe-worthy story with such openness that readers will turn every page rooting for her-and ultimately for all of us.”

5- Redefining Realness: My Path to Womanhood, Identity, Love and So Much More , by Janet Mock

“With unflinching honesty and moving prose, Janet Mock relays her experiences of growing up young, multiracial, poor, and trans in America, offering readers accessible language while imparting vital insight about the unique challenges and vulnerabilities of a marginalized and misunderstood population. Though undoubtedly an account of one woman’s quest for self at all costs, Redefining Realness is a powerful vision of possibility and self-realization, pushing us all toward greater acceptance of one another—and of ourselves—showing as never before how to be unapologetic and real.”

6-The New Jim Crow: Mass Incarceration in the Age of Colorblindness, by Michelle Alexander

“Seldom does a book have the impact of Michelle Alexander’s The New Jim Crow. Since it was first published in 2010, it has been cited in judicial decisions and has been adopted in campus-wide and community-wide reads; it helped inspire the creation of the Marshall Project and the new $100 million Art for Justice Fund; it has been the winner of numerous prizes, including the prestigious NAACP Image Award; and it has spent nearly 250 weeks on the New York Times bestseller list.”

7- So You Want to Talk About Race, by Ijeoma Oluo

“In So You Want to Talk About Race, Ijeoma Oluo guides readers of all races through subjects ranging from intersectionality and affirmative action to “model minorities” in an attempt to make the seemingly impossible possible: honest conversations about race and racism, and how they infect almost every aspect of American life.”

The Proper Response of Law Enforcement to Unconstitutional Executive Orders