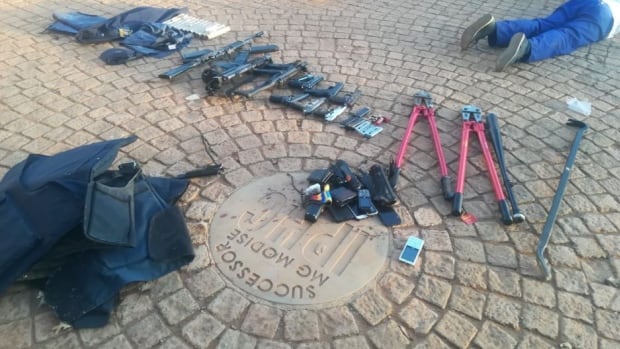 Police posted an image to Twitter showing firearms seized in the operation at the International Pentecostal Holiness Church headquarters in Zuurbekom, South Africa, on Saturday. (Twitter)

Five people are dead and more than 40 have been arrested after an early-morning hostage situation at a long-troubled church near Johannesburg, police in South Africa said Saturday.

A statement said police and military who responded to reports of a shooting at the International Pentecostal Holiness Church headquarters in Zuurbekom found four people “shot and burned to death in a car” and a security guard shot in another car. Six other people were injured.

Police said they rescued men, women and children who had been held hostage and appeared to have been living at the church. It was not clear how many were rescued.

The attack by a group of armed people “may have been motivated by a feud” between church members, the police statement said.

The church is one of the largest — and reportedly richest — in South Africa.

Photos tweeted by the police showed more than a dozen men lying on the ground, subdued, along with rifles, pistols, a baseball bat and boxes of ammunition — including at least one marked “law enforcement.”

The response by security forces “averted what could have been a more severe bloodbath,” national police commissioner Khehla John Sitole said.

Among those arrested were members of the police, defence forces and correctional services.

The church’s Zuurbekom headquarters has been the scene of violence between factions more than once in recent years, with shots fired, rocks thrown and cars smashed, according to local news reports.

“Trouble has been brewing at the church following the death of its leader, Glayton Modise, in February 2016,” The Sowetan newspaper reported in 2018.

Farmer accused of bid to extort £1.4m from Tesco by contaminating baby food

Rupert Murdoch is not an evil genius, whatever BBC’s ‘Dynasty’ doc says

10 Fast-Growing Plants You Can Grow in Under 30 Days

WATCH: Rep. Yoho pushes back on AOC’s accusation that he verbally attacked her

How coronavirus attacks the human body