Prime Minister Boris Johnson came under fire this week over the internal market bill, which aims to protect jobs and trade in the UK after the transition period with the EU ends on December 31. Part of the legislation explains how the UK will “provide financial assistance to Scotland, Wales, and Northern Ireland with new powers to spend taxpayers’ money previously administered by the EU”. The Welsh Government reacted furiously by blasting the bill as “an attack on democracy and an affront to the people of Wales, Scotland and Northern Ireland”.

YesCymru campaign chairman Sion Jobbins warned there was growing support of Welsh independence within the country amid the Internal Market Bill being debated and voted on in Parliament this week.

Between 12.29pm and 7.20pm today, 1,608 Express readers voted on whether Wales could really go it alone as an independent country.

A whopping 1,421 (89 percent) voters said they did not believe Wales could really go it alone.

Only 169 voters (10 percent) said they thought Wales could thrive as an independent country.

And 18 people (one percent) said they did not know. 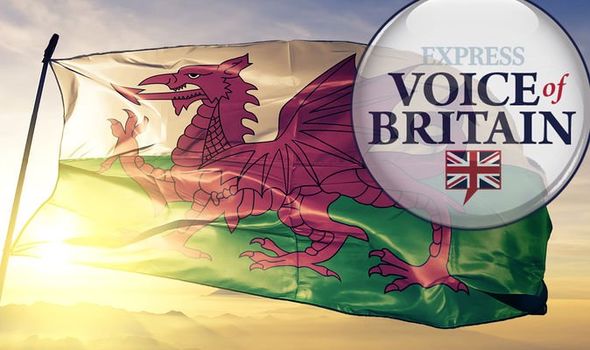 Many readers vented their frustration at the prospect of Wales separating from the rest of the UK.

One person said: “Wishful, if not delusional thinking, without unrestricted access to the rest of the UK’s internal market and the substantial transfer payments made to it, its position is much the same as Scotland’s and Northern Ireland’s.”

Another reader added: “I’m Welsh and no way should we be independent.

“Like Scotland, why cut off the hand that feeds you, we just can’t afford it.”

Wales news: The majority of voters said Wales should not be independent (Image: APESTER)

A third agreed that people in Wales are not leaning towards independence.

They said: “I am Welsh and there is no appetite or desire for independence amongst the silent majority.”

And a fourth reader called for the UK to remain united.

They said: “Breaking up the Great Britain is the worst thing we could do and our children will pay for that mistake.

The UK has made changes to the Brexit Withdrawal Agreement (Image: PA)

“Remember divided we will fall.

“We can be great together again!”

Mr Jobbins previously outlined the key ways Wales may already be “ready to be independent”.

He told Express.co.uk: “Our GDP per capita is higher than Spain or Portugal, our tax revenue per head is high than New Zealand’s, we have 15 percent of the whole of Europe’s tidal power, we already export twice as much electricity as we use and, are in fact, the world’s 6th biggest electricity exporter, we also have excellent brands in food and meats, a strong tourism sector and 6 universities where most of the students come in from outside Wales.

The UK is hoping to gain more control over Welsh spending (Image: EXPRESS)

“We’re recognised as an independent country in many sports – football and rugby being most obvious (where we’re totally self-financing and doing well), have some international consulates here already like Ireland and we have a strong country brand.

“Wales is better and more ready to be independent than the vast majority of countries who’ve ever become independent since the War.”

The result of a YouGov poll carried out in May showed 25 percent of 1,021 people who voted were in support of Welsh independence.

The UK government defended the new bill, which will give ministers more power to spend money in Wales.

The Market Bill would replace EU funding programmes that would have normally been devolved to the Welsh Government.

This includes areas such infrastructure, economic development, culture and sport.

Michael Gove, Chancellor of the Duchy of Lancaster, said: “These new spending powers will mean that these decisions will now be made in the UK, focus on UK priorities and be accountable to the UK Parliament and people of the UK.”

The 25 Best Films To Stream On HBO Max Right Now

How much space do tomatoes need?

The polls are ‘wrong’ and here’s why: RNC spokesperson | FOX News Rundown

‘We Love Law Enforcement’: Church Gifts $1,000 to Every Police Officer in Its Town

Could a COVID-19 Vaccine Be the Mark of the Beast? – Hank Hanegraaff Answers

Chinese Ambassador criticised for remarks that repression in China is ‘fabricated’

Mayor of Seoul apologises to ‘all people’ in will