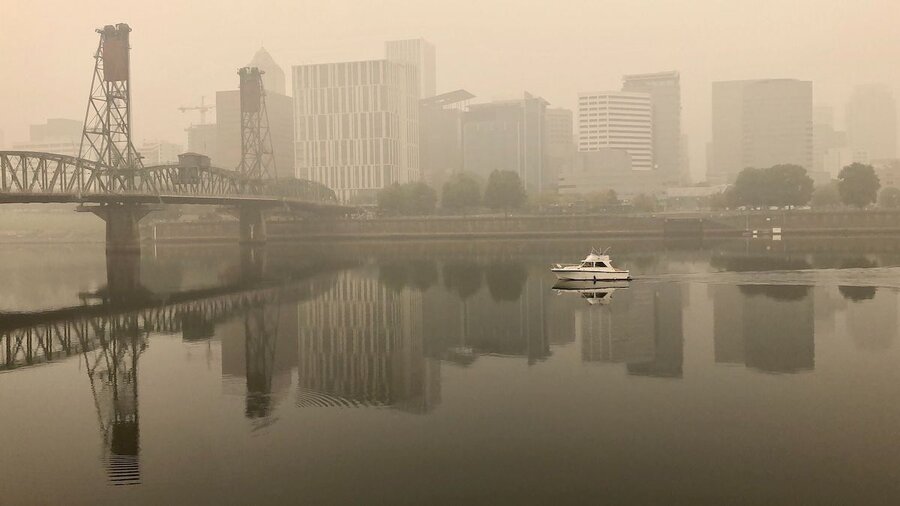 Relief from putrid, dangerous air spewing from massive wildfires across the West won’t come until later in the week or beyond, scientists and forecasters say, and the hazy and gunk-filled skies might stick around for even longer.

People in Oregon, Washington, and parts of California were struggling under acrid yellowish-green smog – the worst, most unhealthy air on the planet according to some measurements. It seeped into homes and businesses, sneaked into cars through air conditioning vents, and caused the closure of iconic locations such as Powell’s Books and the Oregon Zoo in Portland, the state’s biggest city.

“I don’t think that we should be outside, but at the same time, we’ve been cooped up in the house already for months so it’s kind of hard to dictate what’s good and what’s bad. I mean, we shouldn’t be outside period,” said Issa Ubidia-Luckett, a Portland resident, who was grabbing lunch on Monday.

Oregon’s Department of Environmental Quality extended an air quality alert to Thursday after it was to initially expire on Monday. The air was so thick that on Monday Alaska Airlines announced it was suspending service to Portland and Spokane, Washington, until Tuesday afternoon. Hazy, smoky skies fouled Washington state and experts said some parts of California might not see relief until next month.

Zoe Flanagan, who has lived in Portland for 12 years, has barely left the house but braved the smog to walk her two dogs on Monday. On Sunday, Ms. Flanagan and her husband, in desperation, turned on the heater, which has a better filter than their air conditioning.

Dylan Darling, a spokesman for the state’s department of Environmental Quality, said: “I grew up in Oregon and lived here a long time, and to see this much smoke for this long and wide spreading, really stands out in the state’s history.”

Some areas of central California blanketed by smoke are not likely to see relief until October, said Dan Borsum, the incident meteorologist for a fire in Northern California.

“It’s going to take a substantially strong weather pattern to move all the smoke,” Mr. Borsum said at a fire briefing Sunday night. He said smoke from dozens of wildfires in the West and throughout California is pooling in the Central Valley, which already has some of California’s worst air quality even when wildfires are not burning.

“Some of the toughest folks you’ll ever meet are people who live outdoors, unhoused, but it is getting to them,” he said. “We’ve got COVID-19, followed by excessive heat wave, followed by smoke. What’s going to start falling out of the air next on these poor folks?”

In Oregon, places like the Oregon Convention Center in downtown Portland are being used as a smoke advisory shelter where people in need of healthy air quality can go.

Mr. Darling said typically during wildfires in Oregon, such as those in 2017 that carried heavy smoke to the Willamette Valley and Eugene area, people can escape to other areas of the state for clean air.

State officials say they are collecting data to see how these fires compare to those in the past and the effects, not only on people’s health but also the environment.

Tyler Kranz, a meteorologist at Portland’s National Weather Service office, said for the smoke to disperse Oregon will need strong enough winds blowing from the ocean towards land – but there needs to be a “perfect balance” of wind so that it disperses smoke but doesn’t further ignite fires.

“We need the winds to get the smoke out of here,” Mr. Kranz said. “We just don’t want them to be too strong, because then they could fan those flames and all of a sudden those fires are spreading again.”

As she ate lunch at a popular burger place east of Portland, one of only a few places open, Ms. Ubidia-Luckett said the smoke reminded her of stories long-time Portland residents tell about the thick ash that fell on the city when Mount St. Helen’s erupted in nearby Washington state in 1980. There was so much ash that for weeks many residents wore masks and had to clear ash off their cars.

After beginning the meal outside, Ms. Ubidia-Luckett and her young son soon moved inside because the air was too much to take. The boy was with her because his first day of kindergarten was postponed Monday for the second time due to the hazardous air conditions.

“That’s the hard part for little kids. They’re so cooped up so what do you do?” she asked. “Eventually, they want to go outside.”

This story was reported by The Associated Press. AP writers Janie Har and Juliet Williams in San Francisco contributed to this report.

How to Gain Confidence, Eliminate Self-Criticism and Destroy Anxiety

HK lawmakers both for and against election postponement issue statements

Trump torches Democrats: How can they lead a country they want to tear down?

Citing coronavirus, California may release up to 18,000 prisoners by the end of August

My Husband is a Drug Addict and Wiped Out Our Savings

Masks, Constitutional Freedom, And More – On Foundations Of Freedom

Toll expected to rise in blast that shook Beirut, killing 78 and injuring thousands

'The government is letting us starve': Nationwide protests erupt in Lebanon as currency plunges to record low

Tesla Falters! Will It Take The Stock Market Down With It? (Market Update 7.24.20)

Are we Palestinians waiting for Godot?