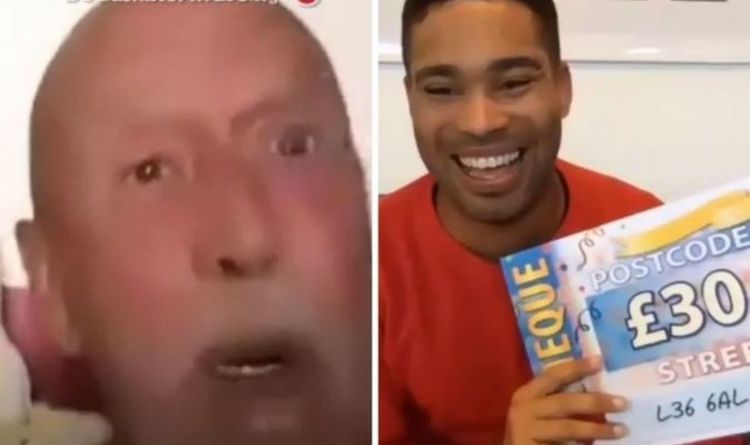 It was double delight for married couple Liz and Ronnie Cookson when their postcode came up on People’s Postcode Lottery.

That’s because the lucky couple had BOTH purchased individual tickets for the winning draw.

It meant they each picked up a cheque for an astonishing £30,000.

Reacting to the life-changing win, 64-year-old Liz said: “Oh my God, no way! Ronnie is shaking something terrible. The phone is shaking with our hands. This means everything – we’ve never had that in our lives.”

Their neighbour, who was the only other person playing with the winning postcode, chose to stay anonymous and also pocketed £30,000.

Liz and Ronnie, who have been together for 26 years and are both retired due to ill health, plan to treat their family with their winngs.

Liz, from Huyton, Liverpool, went on: “We’ve five children between us, 10 grandchildren and one great grandchild. We like to spoil the grandchildren so we’ll be helping them.”

They’re also planning a host of holidays to see family – and maybe win even more money in Las Vegas.

“My sister and nieces are out in California,” Liz Explained. “We’ve been a couple of times but to be able to go and have a bit of money and really have a good time, we’ve never been able to do that before. We’ll be going to Las Vegas too and spending our winnings there! The way things are we can’t go yet but we’ll definitely be going.

“Ronnie would also love to buy a campervan so we could get out and explore the country. We’d love to explore Scotland.”

People’s Postcode Lottery ambassador Danyl Johnson broke the amazing news over Zoom. He said: “It sounds like Liz and Ronnie are going to have a whale of a time with their windfall – I’m made up for them. It was lovely to hear their plans to treat the family too.

“I’m sure our other lucky winner in Huyton will be just as pleased with their cheque.”

People’s Postcode Lottery costs £10 a month to play and there are guaranteed winners every day.

People play with their chosen postcode and are automatically entered into all draws.

A minimum of 32% of ticket sales goes directly to charities and players of People’s Postcode Lottery have helped raise over £600 million to date for thousands of good causes across Britain and internationally.

This draw was promoted on behalf of ActionAid. Players have raised over £9.7million for ActionAid, enabling the charity to work in over 45 countries where it is changing the lives of the most disadvantaged children and women.

Minneapolis: Black Leaders Speak Out Against ‘Abolish The Police’

Antarctica Sea Ice Is Greater NOW Than in 1980

Dwayne McDuffie Was To Write Samuel L Jackson Movies, When He Died

How to Succeed at Growing Zucchini in Containers

The MASTERS is Now Problematic

AP: US probing if Russian bounties played role in killing of Marines

‘First-Of-Its-Kind’: Johnnie Walker Whisky To Be Sold In Paper Bottles