The European Union’s chief executive lashed out against homophobic policies of the nationalist government in Warsaw in saying on Wednesday there was “no place” in the bloc for districts proclaimed “LGBT-free zones” in Poland. “LGBTQI-free zones are humanity free zones. And they have no place in our (European) Union,” European Commission President Ursula von der Leyen told her annual policy speech to the European Parliament. “Breaches of the rule of law cannot be tolerated,” she said.

He blasted: “As usual behind sanctimoniousness there is hypocrisy. What this rule of law policy amounts to is brutal majoritarianism.

“The mainstream majority wants to crush every form of dissent and do not open the door for instruments of the tyranny of the majority, as you promised you would do.

“That was the scariest part of your speech.

“This is already getting uglier and uglier, wilder and more mandatious. 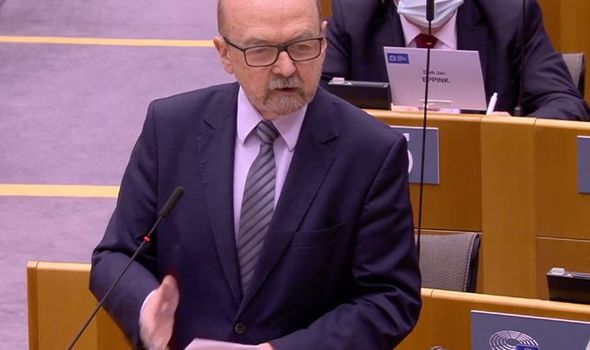 “The European institution wants to switch off democratically constituted institutions of the nation states.

“They instigate internal conflict by endorsing some parties against other parties.

“This is not your business, you shouldn’t do it!”

He added: “This is political arrogance at its worst. Let me conclude: if we continue, if you and your Commission continue the current course, Europe will be wrecked.

“I repeat, Europea will be wrecked.”

He concluded: “Mr Juncker will forever be remembered as the Commission President who lost Britain.

“You, Mrs von der Leyen, must make sure that you are not the President who lost the people of Europe.

“I urge you work with member states not with ideologically driven campaigns masquerading as political groups in this house. Save the European Union from ideology and return it to reality.”

Von der Leyen said the bloc’s executive will soon present “a strategy to strenghten LGBTQI rights” in the bloc, as well as pushing for mutual recognition of family relations in the EU.

Currently, some countries in the bloc recognise same sex marriage and parenthood, but others do not.

That leads to situations in which, for example, two women recognised as mothers of their children in Belgium would not be treated the same way in Poland, meaning they would not have the same rights vis-a-vis their children depending on where in the EU they are.

The Law and Justice (PiS) government in Poland – as well as its eurosceptic ally, Hungarian Prime Minister Viktor Orban – have long been at loggerheads with the EU over undercutting democratic standards.

GOLD BULL CATALYST: We Haven’t Seen This In 75 Years! Plus Fascinating Email From A KWN Reader

After Year-Long Legal Battle, Chick-fil-A Is Allowed to Return to San Antonio Airport

A M6.0 Earthquake Downgraded to M5.8 by USGS Hits Central California With Tremors Felt in the Bay Area

Investigation Finds No Evidence for Recent Allegations against Chris Heuertz

Would you work from home permanently if given the chance?

Trump opens door to another round of stimulus checks, direct deposits

@GA_peach3102 Some have gone past the bullying & in to straight up taking their lives – like that poor man who supported both Trump & BLM ??? https://t.co/bQTbFGB9fh